Win an amazing Wedding Package from all of us at the Victorian House worth over $8000! 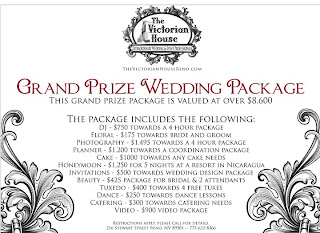 As a member of the Victorian House, I have contributed 4 hours of professional deejaying with complimentary consultation and planning for this Grand Prize.  The other amazing vendors there have also included their services for a lucky winner who will only need a venue- everything else is covered!


You can sign up to win at the upcoming Reno Fantasy Wedding Faire at the Grand Sierra Resort on January 30th or you can visit the grand opening of the Victorian House in February.  Good luck!
Posted by KC at 5:19 PM No comments:

Marc & Stacy had their wedding reception at the Tannenbaum Events Center on Mount Rose Highway above Reno and Washoe Valley on New Year's Day.  What an easy anniversary date to remember!  The roads were clear but light snow fell at times, giving the already spectacular view a tinge of holiday cheer.  Their guests were treated to hors'deurves and beer and wine while the bridal party took pictures.  Stacy & Marc had an ingenious idea for the guestbook: they had a photobooth on site, and the guests had their picture taken, got to keep it as a momento, and then signed pieces of art-paper which will become pages of the guestbook.  Copies of the pictures will then be applied to each page, and voila!  A totally unique and fun guestbook!
After pictures and a Grand Entrance, Stacy & Marc danced to "Whatever It Is" by Zac Brown for their first dance as man & wife.  Then Pastor Mike gave a prayer to bless the couple and the food, and it was off to the buffet for a delicious dinner.
After dinner, some great toasts were made by Matt, Macy, Kristi and the two dads Bob & Terry, and then Bob had a video surprise of snapshots and music of the newlyweds from toddler to today.
The father-daughter dance was next, with Bob & Stacy dancing to "I Loved Her First" by Heartland.  Then Marc and his mom Karen danced to "Mama" by Boyz II Men before open dancing began.
The Anniversary Dance saw a lot of lengthy unions recognized, but the last two couples on the floor both had been married for 40 years!  An auspicious start for Marc & Stacy and something we can all aspire to...
Lots of requests came in throughout the evening and the dancefloor was the place to be.  Some of the favorite songs played were: Bon Jovi's "Living on a Prayer", Garth's "Friends in Low Places",  Shania's "Any Man of Mine" and many others.  Lots of group dancing rocked the dancefloor to such hits as "Cupid Shuffle", "Cotton-eyed Joe", "Cha Cha Slide" and doing the electric slide to "Men in Black".  It was also great to play Terry & Karen's (Marc's parents) song, "Luchenbach Texas" and to realize that they were re-living their wedding from years ago. 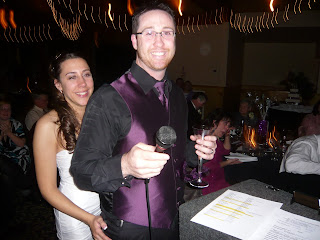 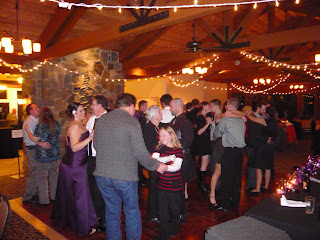 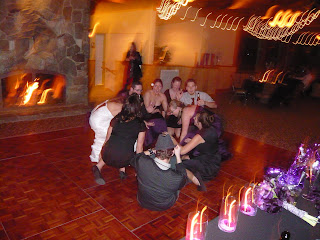 Great people, fun dancing and Stacy & Marc living their dream.  I was honored to be a part of it.  Congrats you two!
Posted by KC at 3:54 PM No comments: