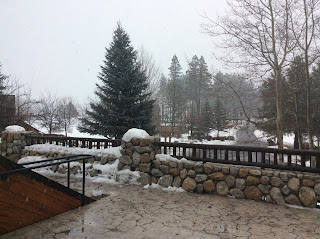 For my last wedding of 2015 I could not have picked a better setting than beside Lake Tahoe while snow showers accentuated the winter wonderland all around us.  That was the case yesterday up at Edgewood. 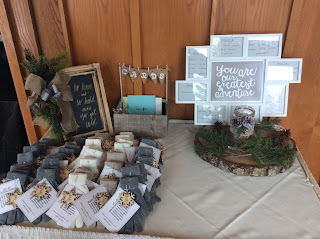 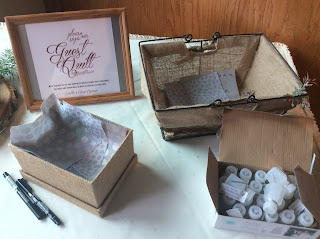 Sandy and Jorge wanted a winter wedding: somewhere their friends and family from the Bay Area could easily travel to and somewhere special.  Of course Edgewood fit the bill.  As this winter has been a good one for snowfall so far, the beach and golf course were covered in a foot of snow and the sleet became flurries which became snow showers as the day wore on. Most of my weddings at Edgewood have been during the summer, and they are glorious with the distant mountains across the Lake, the greener than green links, and the expansive views seen through the unique architecture of glass and wood, but a winter wedding there is maybe even more breathtaking. The windows allow you to feel a part of the wintery scene while still being warm and dry inside. Just a fantastic venue anyway, and with it punctuated by the snowfall- magical. 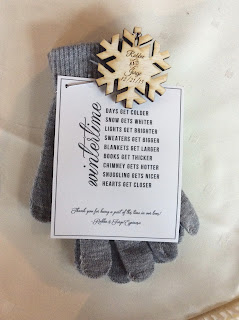 I really loved Sandy's whole plan for her wedding- simple yet elegant. She had so many great ideas!  One of my favorites (coming from a family with a famous quilter in it) was that instead of a guestbook, everyone signed quilt blocks which are to be made into a memory quilt after the wedding. Another idea I thought really unique was the favors she gave out to her guests. There was a nice laser inscribed wood ornament tied to a beautiful poem and a pair of mittens.  The guests absolutely loved them! 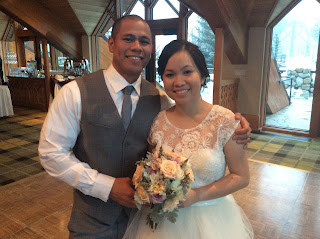 Her flowers were spectacular, and totally fit in with her winter color scheme.  Sharon at Blake's Floral Design, a fellow Weddings of the West member really hit a home run, and Sandy kept talking about how she was so pleased with how her bouquet looked- just as she envisioned.  Sharon always arrives super early to arrange her flowers and deliver the bouquets so she really never sees her work in context- with a beautiful bride in her dress and holding her handiwork, so I took a picture during the reception.  Great job as always Sharon!

Jorge and Sandy were married at a church offsite and they arrived and were able to take some pictures before all the guests got to Edgewood.  After some amazing appetizers and cocktails, I introduced the bridal party to Kool & the Gang's "Celebration" which Jorge and Sandy had picked.  Soon after that, Father Carl was saying a benediction before the meal and then Sandy & Jorge were hitting the fabulous brunch buffet. 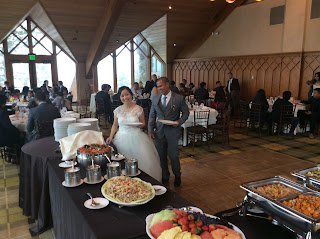 Fabulous is an understatement.  If you have read other blog entries of mine, you know I am a fan of Edgewood and of their chefs :)  This buffet was one of my favorites ever!  Here is a (probably incomplete) list of the offerings of the buffet:

Debbie and her crew were fantastic, as always.  Edgewood (and the Grove down in Reno) are how I judge service at all the venues I play. The service is efficient, friendly, and professional and sets the standard.  I love how Edgewood could just rest on their beautiful surroundings, fabulous architecture and sterling reputation and not worry so much about service and food. But no, they strive for excellence in every facet and it shows. And that is the dedication and experience you want for a wedding and reception. 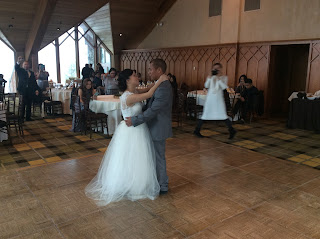 After brunch, toasts were made and the cake was cut (accompanied by Plain White T's "1-2-3-4") and dancing began with Jorge and Sandy's first dance, Jason Mraz's "I Won't Give Up". Roberto, Sandy's dad then danced with her to "Wind Beneath My Wings" followed by an Anniversary Dance that they picked, Dan Fogelberg's "Longer". 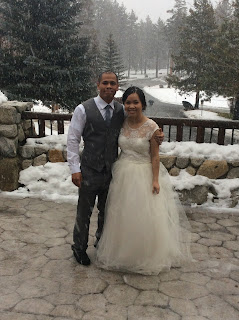 The rest of the afternoon we danced to Cupid Shuffle, Usher, Flo Rida and lots of other songs.  I especially loved the guests (and bride and groom) stepping outside for a momentary picture in the snow flurries. Lots of great pictures with big snowflakes in their hair. Pretty magical.

I want to thank Jorge and Sandy for inviting me to be a part of their amazing day- you two really are a special couple!  Thanks to Sharon at Blake's Floral Design for her usual exceptional floral artistry.  And thanks to Debbie and all of the crew at Edgewood from the servers to the cooks to the people putting tables up and taking them down at the end of the day. Just a solid bunch of professionals. Edgewood should be very proud of them all.  Here's to a amazing 2015 and looking forward to many more tremendous weddings in 2016. 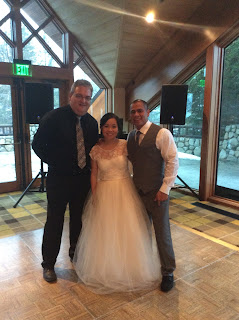 Happy Holidays and New Year everyone!
Posted by KC at 4:04 PM No comments: