I love the digital age! Oh, don't get me wrong, there is nothing like the feel and sound of a 12" single spinning on a Technics 1200 turntable, but other than that, technology today wins out in every other way. My speakers are lighter yet more powerful. My MacBooks hold so much music it would take me a U-Haul truck to carry all the albums and CDs I've uploaded. But best of all, the internet allows me to connect with amazing brides & grooms whom I might have never gotten to know before the age of Google, blogging and FaceTime. One such couple is James and Lisa.

They were having their wedding up at Lake Tahoe but live down in San Diego and found me online. We chatted and exchanged emails and as I travel to SoCal quite often for family and to DJ events we arranged to meet at Gordon Biersh in Mission Valley. I was down for an annual bocce tourney I DJ so it worked out perfectly. It was a great evening- we had spent the afternoon with friends, the Aztecs were playing basketball on the monitors at GB, and Jimi and Lisa and I immediately clicked. They were very laid back and fun to be around but also had definite ideas about their day and the events and music that would help make it uniquely theirs. For the next few months we met via FaceTime, exchanged emails, and gradually firmed up the plans for their day.

Their venue was the Galilee Episcopal Camp and Retreat in Glenbrook NV. I have passed it many times coming down Hwy 50 into the Tahoe Basin but was unaware weddings were hosted there. They really don't do very many, but the location, the staff, and the delicious food really make it a unique and memorable spot for a celebration like Jimi & Lisa's.  The compound is nestled between cabins to the north and a huge lakefront mansion to the south, and it is quiet, peaceful, and overlooks a very beautiful stretch of Tahoe. There are cabins that can be rented, a quaint stone church, and several outbuildings that remind you that it is a retreat most of the year- warm and comfortable but not pretentious. The staff fits right in. They are friendly and easy to talk with- they are proud of their little piece of paradise on the shores of the Lake and are happy to share it with visitors. Stuart, the head honcho there, was constantly checking on the guests, food, and countless other details without being obtrusive. He and his staff engender a feeling of comfort and friendliness pretty unmatched in the area. A real hidden gem of a venue.
Lisa and Jimi had their ceremony underneath a pine grove overlooking the lake, and I was able to watch a bit of it after I finished setting up for the reception. They had an acoustic duo playing their ceremony music and when they officially became husband & wife, the duo and all the guests moved over to the reception area while the bridal party got photographed. I made some announcements here and there but basically just enjoyed the duo's music like the rest of the guests. That duo turned out to be the Sierra Sisters. One of the two musicians looked very familiar and it turned out to be my daughter's elementary school principal! I had no idea she was so talented musically! She is an outstanding educator but at all the assemblies my daughter sang in, not once did I see Dr. Moller pull out her instrument and strum along with her kids. Life is always surprising you, and in very good ways  :) 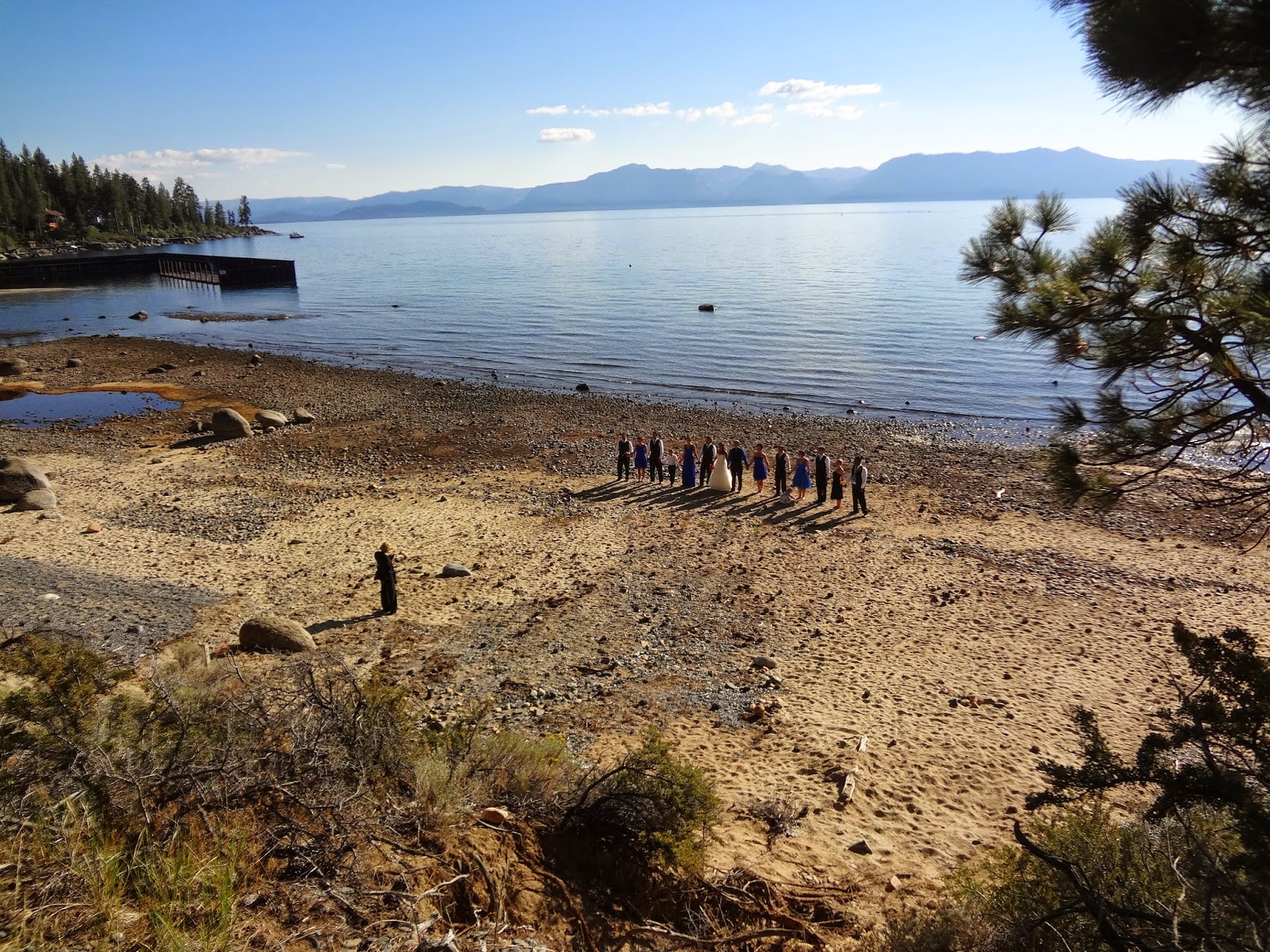 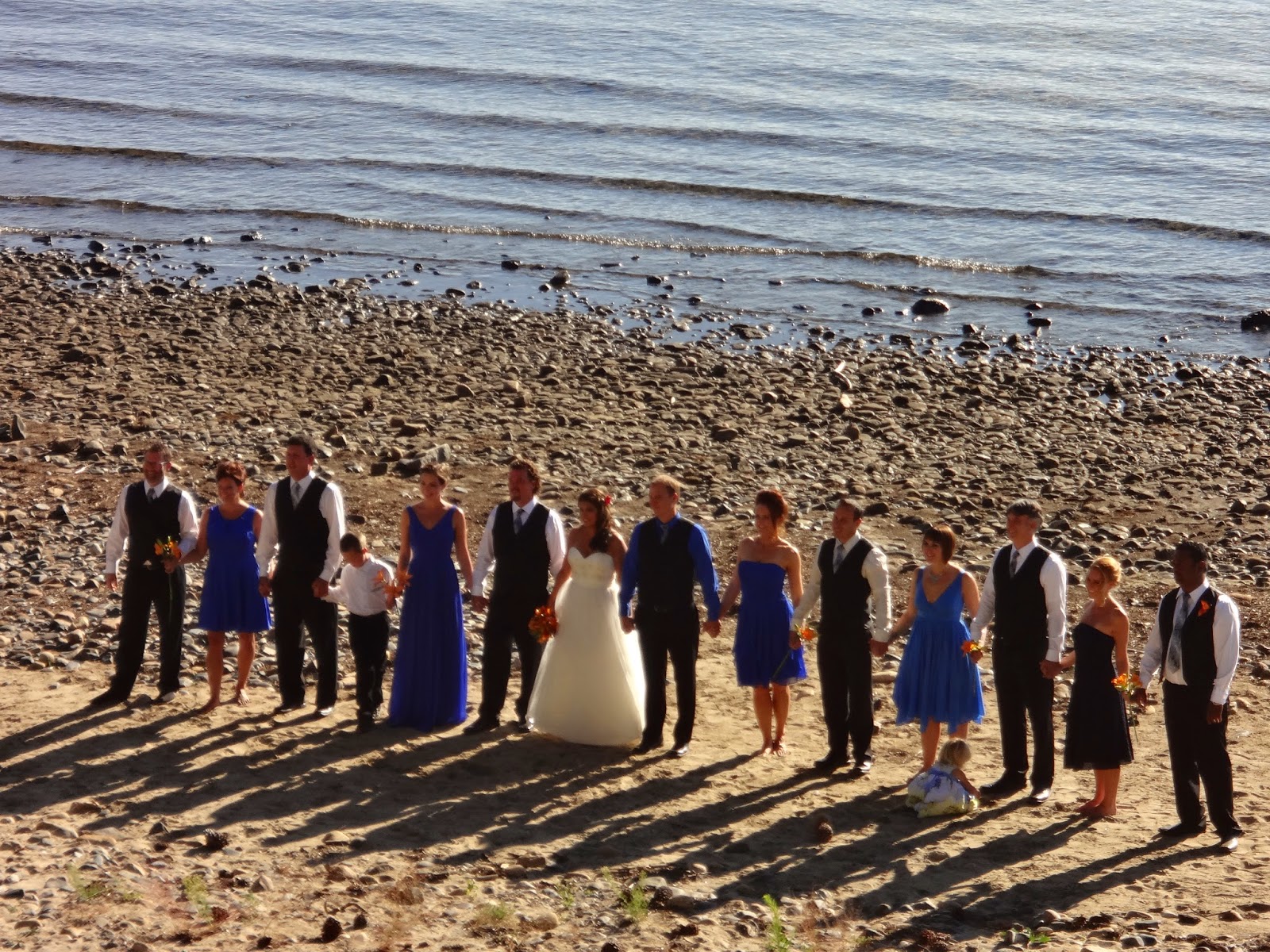 When the BP returned from pix, I played "Happy" by Pharell and introduced the bridesmaids & groomsmen. Then is was time to introduce Jimi & Lisa, and I loved the enthusiastic response from the guests and family. I played "Signed, Sealed, Delivered" by Stevie Wonder and then went into their First Dance, a rendition of "All of Me" by John Legend accompanied by Lindsay Stirling. The crowd went wild and was so energetic and involved all night long. I can't recall when I have had so many great conversations with guests, and I'm just the lowly DJ! What a group! But if you meet Lisa & Jimi you'll understand why- fun & happy people come with fun & happy families & friends. I spoke with authors, musicians, and just plain interesting people. And these folks had come from all over the globe to be with Jimi & Lisa on their day. I am getting off the point, but my favorite story was from a relative who had come from Edmonton Alberta to be at the wedding. He was born in Africa, lived in England and the United States, and now resides in Canada. We got to talking about concerts we'd seen, and he had the best concert story ever:

He was bar-hopping in London in the late 60's after his soccer team had won. He and his friends were a bit rowdy and kept on getting booted from bar after bar. They went into the next one and he became entranced by the musician on stage. He was pretty drunk, yet he said the man's guitar playing instantly sobered him up and he forgot about his friends and the soccer match. He had no clue who the artist was, but as he looked at the tables near the stage he noticed they were occupied by all the Beatles (minus John), Eric Clapton, and all their wives/girlfriends- every last one of them entranced just like he was. You've probably figured out who it was- the only one who could so impress a virtuoso like Clapton: a heretofore unknown Jimi Hendrix. All my concert stories went out the window. None could ever compare to that. Just a highlight of the fantastic people and conversation that night! Have I ever said that I love my job?  I do!
After the First Dance a fabulous meal was set out and I was impressed by its simplicity and quality. It was made in the retreat's kitchen, and it wasn't filet mignon or super fancy, but man was it delicious! My favorite was the salad with fresh berries and nuts and the fantabulous chicken- understated but outstanding. As dinner wound down the toasting began and then it was time to cut the brownie. Lisa & Jimi had a brownie bar instead of a sheet cake or cupcakes. The guests loved it! Decadent yet it fit so well with the atmosphere and vibe. After everyone indulged in chocolate awesomeness one of my favorite moments of the evening started. 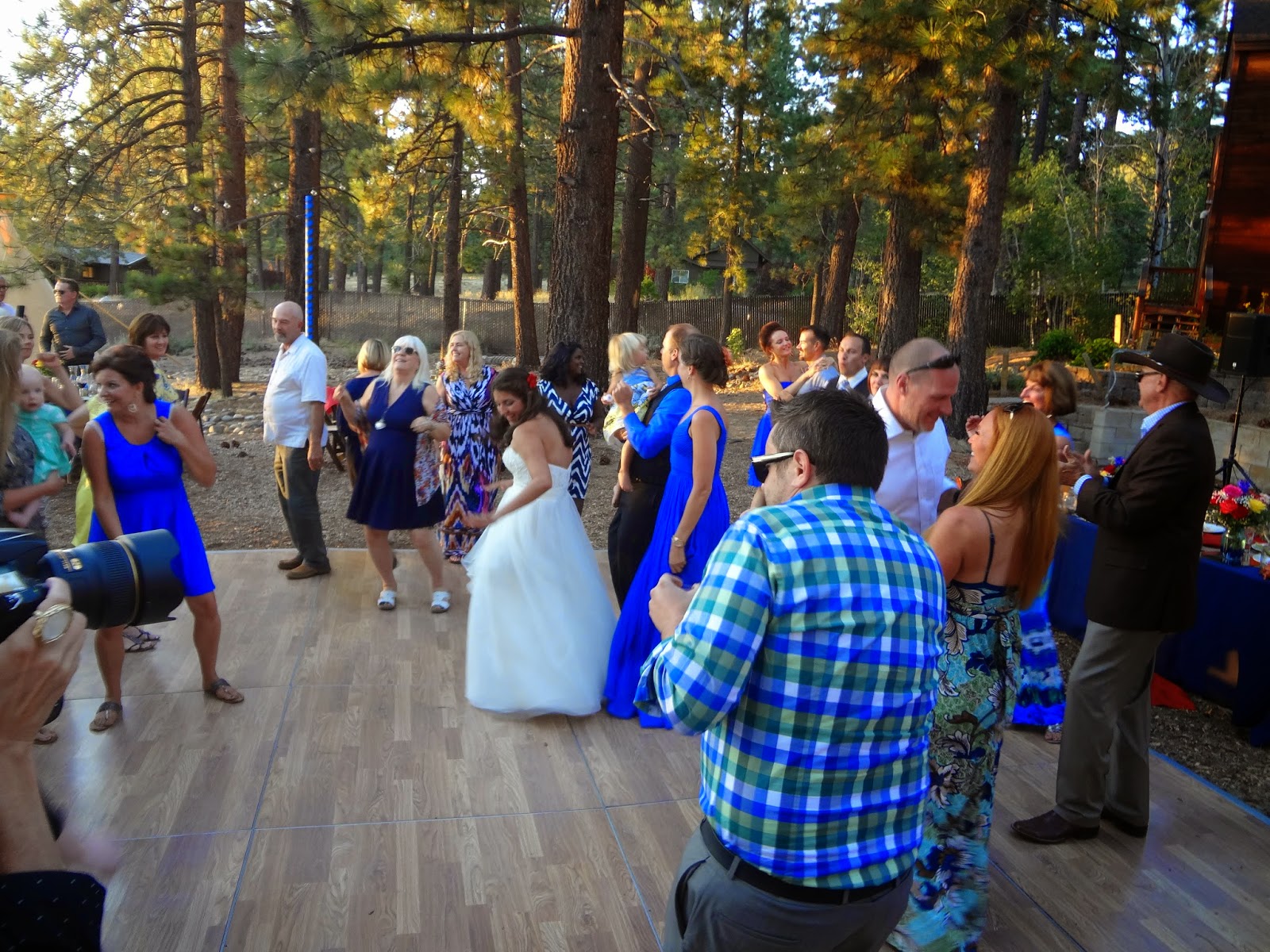 Matty, a friend of Jimi's had a phenomenal way to start the general dancing. I played a karaoke version of Stevie Wonder's "Superstitious" and he began belting the song out like he was Stevie himself! It was infectious as everyone joined him on the dance floor and the dancing never really halted after that except for the tosses. I loved the combined Father-Daughter/Mother-Son dance they did as well. I started with Ben E. King's "Stand By Me" and then about a minute I segued into "The Twist" by Chubby Checker. So fun as it surprised dad Jim and mom Bernadette and soon everyone was twisting the night away (okay, so that is a Sam Cooke reference...). The Anniversary Dance came at the first slow break and its was so great to honor Roger and Sandy who now share their anniversary with Lisa & Jimi by playing their song, "Shining Star" by the Manhattans.
Just a terrific night of dancing and fun followed. I played everything from Van Morrison to Marley; from Outkast to Marvin Gaye; from Billy Joel to James Brown. There was limbo-ing, electric & cha cha sliding, and some very good MJ impersonators during Thriller. Just a perfect crowd.  At the end of the night we shut down the dance floor to Van Morrison's "Crazy Love." 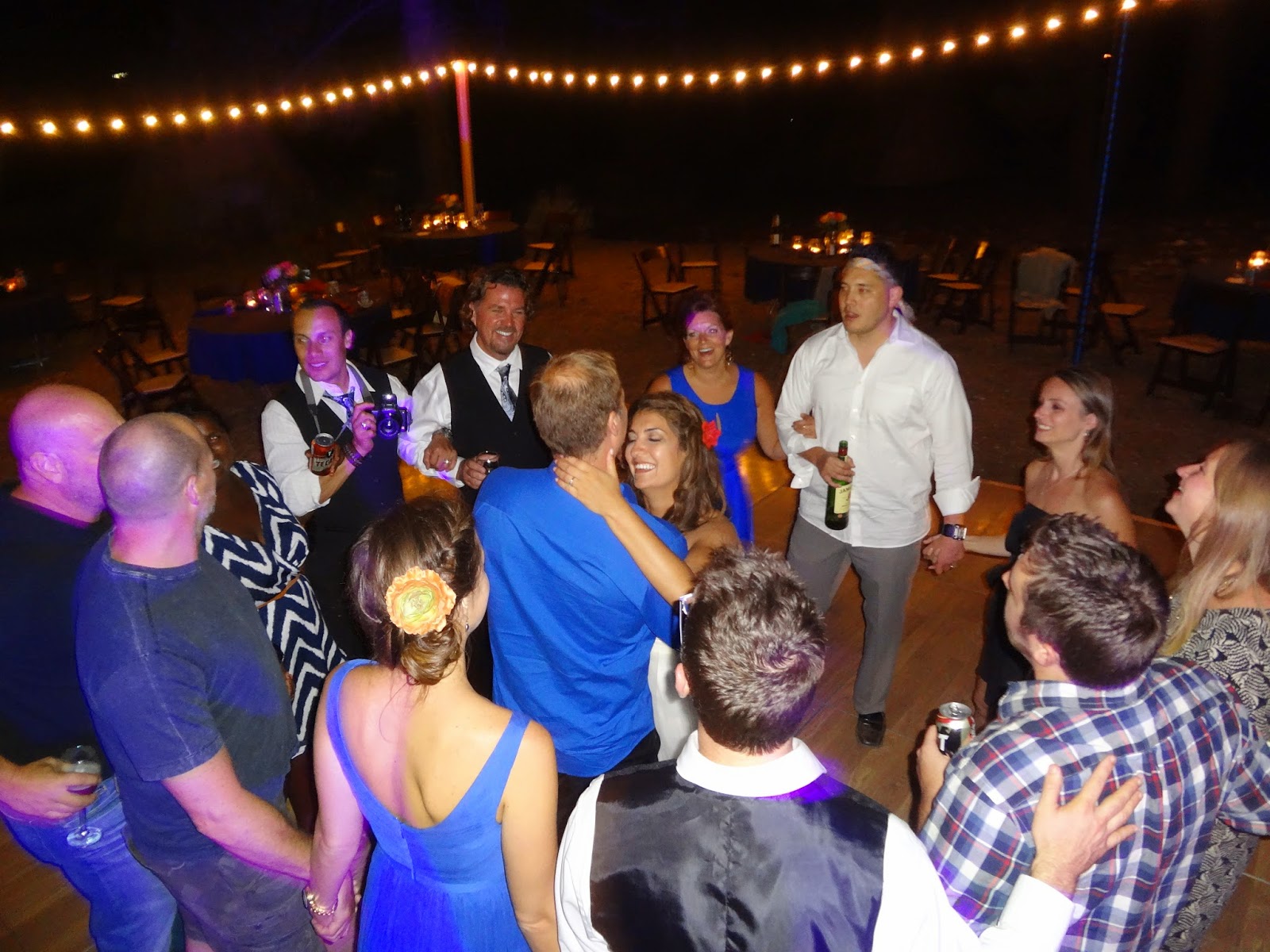 So honored to have been a part of an extraordinary reception with such extraordinary people. Thanks to the Sierra Sisters for great ceremony and cocktail music. Thanks to Stuart and everyone at Camp Galilee for their friendly service and stellar food. But most of all, thanks to a pair of special San Diegans who allowed me to be a small part of their evening. Jimi and Lisa, you rock! Go Aztecs! 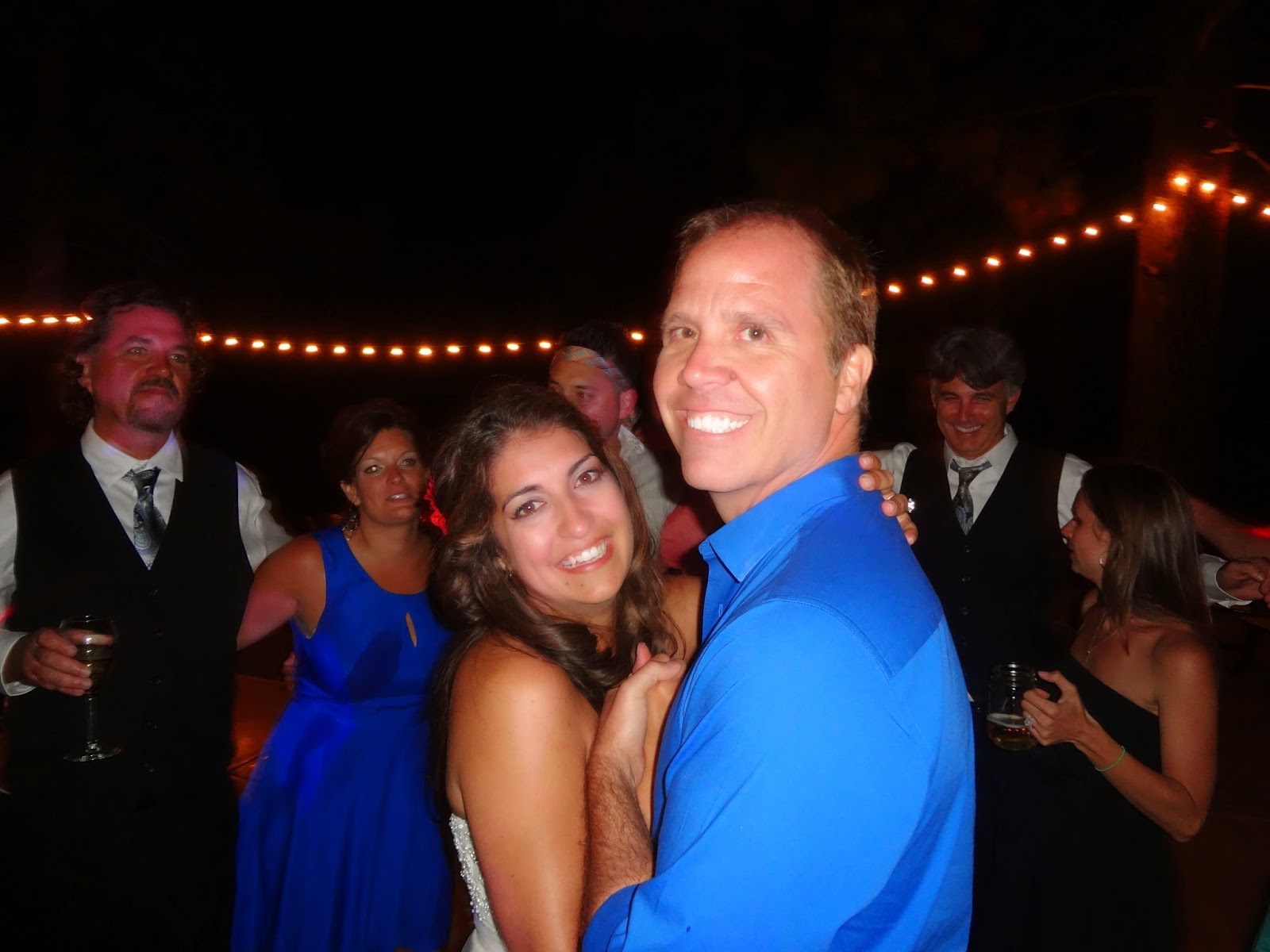