Michelle & Justin at Skylandia Park with As You Wish Catering

Weddings for me are magical- moments that inspire me and make me strive to be a better husband and DJ. All are special and unique but some are more magical than others. It is sometimes hard to put your finger on why. In Justin and Michelle's case, it was apparent from the first.

The biggest factor in a perfect wedding and reception is the couple getting married. I am lucky in that my brides & grooms are mostly professionals, closer to thirty than twenty, and that they have found me because they don't want ordinary for their day. My couples know what they want and don't want for their big day, and it is a privilege to make their dreams become reality.

From the moment we FaceTimed, I knew their day was going to be special. They have an ease about them, an aura of happiness and positivity that is infectious. Their love for each other is always apparent- it's like they are the embodiment of living life fully and joyfully. And they have found the perfect partner in the other. That old adage, being greater together than the sum of their parts is absolutely true. I was enchanted- not a word I use often- and excited to be a part of their special day.

Tahoe and more specifically Skylandia has a special place in Michelle's family. It is a gorgeous area on the North Shore and a place where memories become sacred, to paraphrase Nicole, their phenomenal officiant. When Justin, a native of Colorado, visited for the first time, he became interwoven into the magic of the place and every subsequent visit to Tahoe includes walks in the park and selfies on the dock. So when they decided to marry, no other spot seemed more fitting for their vows.
I had never been to Skylandia, so when Justin & Michelle came up to the Lake several weeks ago I met them there for our final planning meeting. It's more of a locals spot as the usual beach parks are right on the highway. Skylandia takes some perseverance  to discover. A beautiful forested area stretches in three directions and a rocky bluff overlooks the beach and has views all the way across to South Lake Tahoe. It is a place where almost everything has to be brought in, but is away from crowds and tourists- not always a given on the North Shore.
When I arrived on Saturday, tables were decked out, chairs were set up for the ceremony, lights were strung between trees with photos hanging from the strands, and a dance floor was set up waiting for me. Power is not available there, so I brought my Honda 2000. It is a workhorse- it quietly provided clean and plentiful power for 7 hours without fail. It sips the gasoline as well- I don't think it used much more than a gallon.  I was early and set up by 2:30 for a 4pm ceremony, but as people began to arrive around 3pm, I started a nice background mix to set a fun tone.
I was a bit worried as the winds were gusting that day and the sun was in and out of the clouds. It felt more like Spring than July, but as the ceremony got closer, the winds started to die down and weren't a factor.  It really was a group effort from Justin & Michelle's friends and family- there were several people making sure things were set up and perfect when I got there and friends brought their Photo Booth. Their props/hats/masks etc were probably the best I'd seen at an event. Quality, fun stuff that really got people happy and silly.

The ceremony was fantastic. With the Lake at her back, Nicole wove nuptials that were specific to Michelle and Justin- telling their story, eliciting laughs, some happy tears, and finally huge applause as Justin & Michelle became Mr. & Mrs.

Pictures followed while the guests enjoyed cocktails and appetizers courtesy of As You Wish Catering. I was very impressed with As You Wish. I have worked with them before, and their standards of personnel and food and beverage service are the highest. Many times during the evening As You Wish went above and beyond, cleaning broken glasses on the dance floor, helping people find belongings and countless other little things that make an exceptional  wedding vendor. Their BBQ-themed dinner fit the setting perfectly and was efficiently served and delicious. I am sure they were happy to work at Skylandia, as it is just a couple of blocks from their office/kitchen.

Several games were set out for the cocktail hour. Some bocce and corn hole matches were played and witnessed and Justin & Michelle's "guestbook" were some large Jenga pieces that people would sign and then play with- just a fun vibe throughout.

Michelle and Justin had a Grand Entrance punctuated by a little Usher, and dinner was immediately served. After dinner, the two Mikes (Justin & Michelle's dads) gave poignant toasts followed by Jerica and Jessica, their Best Woman and Maid of Honor respectively.  I get to witness many toasts and these four really were great. Following Justin thanking everyone for being a part of their day, the dancing started, and never really ceased except to cut the cake and toss the bouquet and garter. 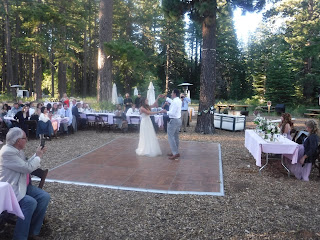 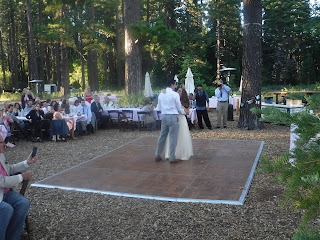 "Die a Happy Man" was Michelle & Justin's First Dance, and it was neat because one of their beloved dogs, Aspen, joined them at the end of the dance :)  Next up was Michelle and her dad dancing to what else but "Michelle" from the Beatles. Michelle had danced with her dad at his wedding, so they already had some fantastic history with the song, and halfway through I invited all the other fathers & daughters to come up and join them in the dance. Always tugs on the heartstrings a bit!

Justin had a surprise for his mom when the Mother Son dance started. I played "Wonderful World" by Satchmo for twenty or thirty seconds then scratched out and started up "La Bamba" by Ritchie Valens. Everyone including mom was surprised and it became the joyous start to open dancing. I invited everyone up and soon we were deep into an oldies set that just set the tone for the rest of the night.

Family and friends were really tremendous throughout the day and evening. So many people came up not just to request songs but to just chat and I had some fantastic conversations throughout the evening. Most of the crowd came from a good distance away and their love for the newlyweds was very apparent. I think Michelle and Justin have that effect on people. If you knew them, how could you possibly miss their wedding day, even if you call Colorado or the East Coast home?  My favorite conversation was with Michelle's grandfather. After a lively rendition of "Tequila" with everyone singing along and doing their best PeeWee Herman dance, he came up to me and told me that he was in the room when Danny Flores wrote the song. It was a B-side instrumental to the Champs' first record but it became the star instead of the A-side. What were they doing as Flores wrote the song you might ask? Drinking tequila, of course :) 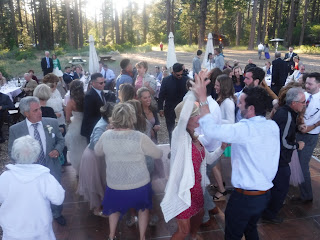 I played a great mix of oldies, 90's pop and hip/hop, rock & roll and a little country and the dance floor never emptied. Lots of fun requests meant a happy crowd and a happy DJ. We went an extra hour until the dreaded Tahoe 10pm curfew reared its ugly head. Finally, as I was packing up, everyone headed down to the pier for a last group shot and some fireworks went off nearby. Coincidence? Probably :)

Thanks to everyone at As You Wish Catering for a stellar job. Thanks to the family and helpers that spent a lot of time getting Skylandia just right. Thanks to all the guests who made me feel like one of them instead of a hired hand. And finally, thanks most of all to Michelle and Justin for including me in their day and evening. I am honored to be a part of many fantastic receptions and this one was one of my favorites. If you can't tell, I love what I do!