This wedding season is still young but it has been already filled with fantastic nuptials and receptions- every one seems a bit better than the one before it. Superlatives don't do these couple's special day justice- I am continually inspired by my brides & grooms, their amazing venues, and their fun-loving crowds who dance the night away- I cannot wait for the next event!
Such was the case with Zach & Jill's recent wedding and reception up in Graeagle at the Corner Barn. I had been talking to Zach for many months- touching base every so often as he was away at SDSU (go Aztecs!) getting his MBA. As we got closer to the big day I met with Jill and we finalized the timeline and music selection. I was excited to play at the Corner Barn- I had driven by it many times on the way to other venues but until Jill & Zach's day had never performed there. It is hard to miss, at the crossing of Hwy 89 and Hwy 70 and is truly a great barn venue with modern amenities. It was a large crowd (280+) and everyone was accommodated everyone nicely inside. Indeed, as the weather was a bit sketchy the ceremony was also moved inside and again the Corner Barn worked out perfectly. Jill & Zach and their friends & relatives had decorated it, adding so many special touches I was really in awe of their skill and ideas. A bridesmaid, Alice I believe, is a graphic designer and the various signs she had made were the best I'd ever seen. A large bar area towards the front door was stocked with cases of libations, and a neon sign with their last name lit up the other side of the door area highlighting several areas where the cake, gifts, and video guestbook were positioned. I like the fact that unlike many barns I have performed in, the floor is solid concrete and there are plenty of electrical outlets with modern wiring- makes my job so much easier :)
As the guests arrived and were seated we got closer & closer to the appointed time. Soon the parents & grandparents entered to Mick McCauley's "Serenade" followed by the bridal party accompanied by a great rendition of "500 Miles" by Sleeping at Last. Finally Jill and her dad entered to a really great selection Jill had made, "You Belong to Me" by Carla Bruni. You know how you associate songs with important moments in life? That song, whether by Bruni or whomever will now always evoke memories of Jill's dramatic entrance. The Carla Bruni version is stripped down musically, full of life and breathy lyrics that just screams to be made for such a special moment in time, and I thought Jill really set the bar high for other brides walking down the aisle- just a perfect moment in time where everything slowed down for a a moment and all of us witnessing it almost forgot to breathe. That special.
Uncle Patrick presided over the ceremony and did a great job for his first ever officiating gig. I really liked their vows and also a trio of readings, poems, and passages given by some special family members. It really made the ceremony personal and soon they were pronounced husband & wife, kissing each other, and exiting to the classic Crystals song, "Then He Kissed Me." While pictures were being taken, the guests enjoyed appetizers and cocktails and explored the Barn. Zach & Jill gave me an eclectic list of songs for both cocktails and dinner as well as a dozen or so for dancing later. I liked their musical tastes: everything from Milky Chance to Van Morrison; from Gerry Rafferty to the Kinks; from Alabama Shakes to Hall & Oates. Soon we were welcoming them back to their reception  with Mika's "Love Today". They then went into their first dance, Queen's "Best Friend" which got the crowd even more pumped and we segued into a delicious family-style dinner prepared by the great people at Longboards Bar & Grill from nearby Plumas Pines Golf Resort. 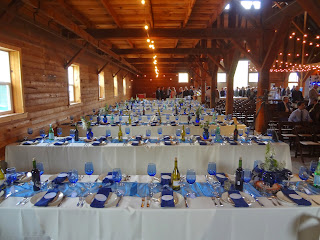 Which brings me to my fellow wedding professionals. I performed at a wedding in Longboards at Plumas Pines for Mark & Georgia about a year ago and it was a huge hit, and a great deal of the credit went to the food, atmosphere, and staff there. This evening, Longboards came to us and I was again impressed by the people and that the quality of the food was maintained miles away from their home kitchens. Their prep work was efficient and they were able to feed a barn-load of hungry people quickly and with friendly professionalism. Jill & Zach made a great choice picking them to be a part of their day.
The photography and video departments were more than ably filled by Courtney of Courtney Aaron Photography and Sky Rondenet of XOXO Video. Courtney had a second-shooter and both of them were everywhere, capturing moments and were super easy to work with. Sky was feeling a little bit under the weather but you wouldn't have known it from her energy and skills. I loved the fact that she is a take-charge type of person and I had a lot of fun working with her. I am in awe of photographic & cinematographic artistry and both Courtney & Sky exemplified this. I saw them work and I know the end results will be ridiculously fantastic.  I hope to work with both of them again in the future.
Toasts followed dinner, and with the toasters having personalities as big as the dance floor, the toasts were both funny and heartwarming. Adam, one of the best men and Zach's twin brother started and set the bar pretty high (and sometimes low) but Chelsea (MoH) and Trevor (other best man and brother) were up to the task. After Zach & Jill thanked everyone for coming (and refuted some dubious testimony from the toasts), Jill stepped into the spotlight with her dad Mark for their Father-Daughter dance, the classic "Wonderful Tonight" by Slowhand himself, Eric Clapton. Sherry then joined her son Zach up on the dance floor for their special dance, "Love Me Like a Rock" by Paul Simon. 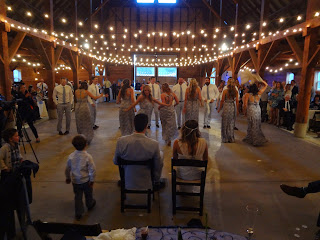 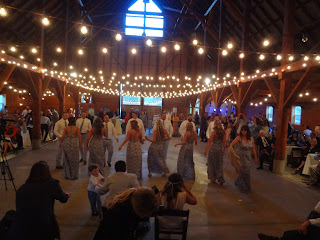 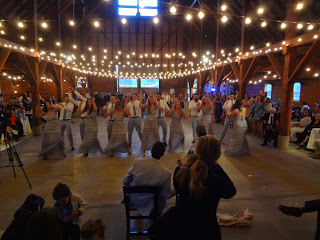 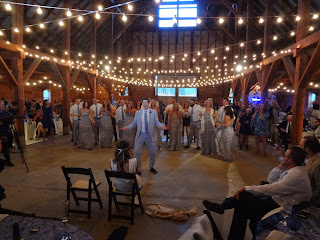 For me though, the coolest moment of the evening was a special surprise that the Bridal Party had for Jill. They sat both Jill & Zach down at the edge of the dance floor. I cued up "Sugar" by Maroon 5.  They then, in complete choreographed unison, danced and sang to the B&G. As different lyrics came up, one of them would peel off and sing them directly to the bridal couple. That was cool enough, but all of a sudden, when the lyrics were at "I want that red velvet" or so, Zach jumped up and sang to his new bride! He fit right in to their choreographed moves and needless to say the Corner Barn went berserk as Jill was speechless!  So freaking awesome. I have done over 750 weddings and have seen a lot of cool things: grooms surprising their brides with guitars & songs; a Maid of Honor rapping her speech to DJ Jazzy Jeff & the Fresh Prince; a dad surprising his daughter in the midst of their dance with "In Da Club" and the list goes on. The practice & enthusiasm that this bridal party and Zach put into this particular moment puts it right up there with some of my all-time favorite moments as a wedding DJ. I cannot wait to see XOXO's video  :)
The rest of the evening was just as fun and fantastic. The crowd was enthusiastic and ready to dance the night away- just the kind of crowd every DJ hopes for. I started the dancing with Walk the Moon's "Shut Up and Dance" and it just escalated from there.  I played a little and lot of everything, had a bunch of fantastic requests, and was able to weave a mix that pleased everyone. Some special moments included a huge family singalong to "Devil Went Down to Georgia" with Zach smack in the middle of a huge circle, a long and tight Motown mix, and quite a few Garth songs as many in the BP had just saw him in concert. "Footloose" was requested and I swear this guy had the Kevin Bacon moves down perfectly.  It was also great to see Kelly & John, a couple whose wedding day I had the privilege of being a part of in 2013. I dedicated a little Rob Base to them :)

I liked that the little touches never stopped. Taxis were provided later in the evening for those who had imbibed a bit too much (I was the last person to leave the Barn and there were a dozen or more cars parked in the lot whose drivers had taken the cabs). Lots of pizzas arrived around 10pm and were a huge hit as the active dancing crowd had begun to work up another appetite. I had a young man come up to me as the dancing was going, interested in how I picked & mixed songs. His name was Pierce and he was very polite, serious but friendly, and eager to learn so I put him to work. He spun a set of tunes (under my supervision of course) and even scratched a bit and got quite a few cheers from the crowd. I hope in 6-8 years he puts himself through college spinning tunes at fabulous weddings like this one. He's got potential, smarts, and the beginning of some skills- there is always room for another great DJ  :)

As the evening came to its conclusion, I played the last few requests and then surprised Zach with an extra last song, "Shake It Off" by Taylor Swift. Taylor is his guilty musical pleasure (as she is for many of us) and it was a perfect high note to end perfect day and evening.

I want to thank Sky from XOXO Video and Courtney from Courtney Aaron Photography- both true professionals and fun to work with to boot! Thanks to the Corner Barn- what a fun venue! I know where I'll recommend when a bride asks me if I know a good barn for weddings. Thanks to Longboards Bar & Grill for fantastic food and service. Finally thanks so much to Jill & Zach. I am truly blessed to be able to do what I do and doubly blessed to be a part of a night like yours. In a career of spectacular parties, this was one of the best ever, and that is saying something :) 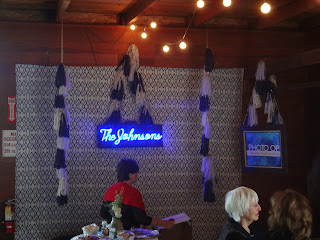 Congrats Jill & Zach!  Have a blast in Spain, run really fast in Pamplona, try the pimientos de padron (my fave) and wash them down with lots of Mahou and Sangria. Felicidades!