My first wedding of the 2016 wedding season and it was a blast.  Two people, deeply in love. Two exceptional families.  One of my favorite venues.  A crowd ready to party.  And two phenomenal wedding professionals recording it all.  What a way to kick off the season!

Alden and Melissa.  What can I say about these two?  Absolutely head over heels in love.  Fun to work with from day one.  From families that exemplify love, commitment, and unwavering faith, they exude an aura of purpose and of life, and most importantly love for one another.  There were so many moments that I choked up a bit- watching their total commitment to one another.  It makes me want to be a better husband and reminds me of those moments in my life that are so important and indelible.  Maybe the best word to describe their love and wedding is "exuberant".  A special couple having their day and evening in a special place.

Edgewood.  Definitely special.  One of my favorite venues.  The uplifting architecture and gorgeous setting is punctuated by the best service and staff on the Lake, and probably in the entire area.  Many of their employees have been with Edgewood for over twenty years and one I spoke with one yesterday who just passed 35 years. And the food!  Not your ordinary fare!  Dinner was plated/served and the guests chose from prawns, fillets, and pheasant.  I had the pheasant and it was fantastic!  Servers are efficient and friendly yet unobtrusive and they make my job so easy because of all these qualities and because of their vast experience.  It's a well-oiled machine that I am always happy to be a part of. 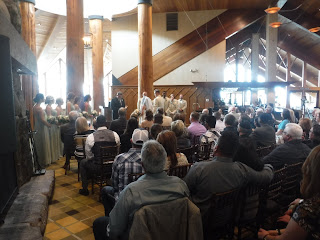 The weather was a bit iffy with some drizzle, so the decision was made to have the ceremony inside instead of out on the green.  Normally, this would be quite a disappointment but not so much at Edgewood.  The building, with its glass and wood and stone already has an ethereal vibe, and in the center it is almost cathedral-like, and that is where the efficient staff seamlessly placed chairs and moved furniture to make the ceremony happen on time.  I played Alison Krauss's "I Will" when the parents and grandparents were escorted in, and then "Tonight" by Secret Nation for the Bridal Party. An absolutely radiant Melissa and her dad Israel then entered to "I Do" by Jessie James Decker.  I looked at Alden when she came up the stairs and he was so full of emotion seeing his bride in her dress for the first time- it reminded me of my same moment 29 years ago.

Capturing all these moments were Jason of Video Quest Productions and Angie of Hall Creations Photography.  They are true professionals who worked well with each other, the staff, the bride & groom and myself all throughout the evening.  I don't think I've worked with Angie prior to last night but I'd love to work with her again.  Jason is a consummate professional when I've had the pleasure of working with several times and his work is unbelievable.  He showed me a few shots during the evening and I know Alden & Melissa will be so happy with his record of their day and evening.  Look up his work on his website. Stunning.  And a great introduction to the beauty at Edgewood.

After Melissa and Alden kissed and exited their ceremony to Justin Moore's "Til My Last Day", we all moved to the gorgeous North Room for cocktails and appetizers.  After photographs, the Bridal Party entered, each pair to their own song- everything from Avicii to Kygo; from Drake to Justin Timberlake.  When Alden & Melissa were ready to enter, I played a snippet from "Tombstone", Alden's favorite film and then Jason Aldean's "Lights Go On" and they came in to thunderous applause.  Very fun!  In a minute or two- no longer- salads were being served by the ultra-efficient Edgewood staff and dinner was on!

Following some great toasts by the dads and by the Bridal Party and finished up by Alden himself, they started the dancing with their First Dance, "I Love You This Big" by Scotty McCreery.  The joy and love between the two newlyweds was palpable as they slowly swayed, singing the lyrics to one another. 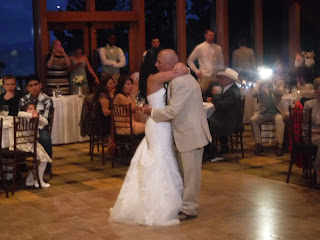 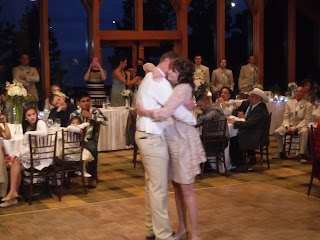 Melissa found a perfect song to dance with her dad Israel- "Daddy" by Addy Anderson.  It was my first time playing it and I know it won't be my last.  What a great song!  Alden and his mom Julie followed with another favorite of mine, "A Mother's Song" by T. Carter Music.  A Money Dance followed and then dancing began in earnest.  I played lots of fun songs for an enthusiastic crowd, starting with Major Lazer and ending the night with Drake.  Lots of Old School, lots of Country, lots of happy dancers :)

Midway through the dancing they cut the cake to George Strait's "It Comes Natural" and then tossed the garter and bouquet. "Hey You There" by Soulja Boy got the girls amped up and then "Danger Zone" by Kenny Loggins did the same for the guys when Alden removed the garter.  But what was best about the garter was the toss.  I played the NFL theme and the guys went crazy!  Literally there were 7-8 guys in midair fighting for the garter, and an injury or two in the aftermath!  What a great group!

I really could not have asked for a better way to start off my 2016 wedding season.  Thanks to everyone at Edgewood- such a pleasure as always!  Thanks to Angie and Jason- so great to work with you two!  Finally, thanks to Melissa and Alden.  The whole planning process was fun and it was so great to be a small part of your magical day and evening.  All the best you two!