Jenn & Dennis at the Grove at Southcreek with The Decorated Bride

Is it possible to plan a fantastic wedding in two weeks?  Yes!  Especially if you have great family support and vendors willing to go the extra mile, and Jenn & Dennis had both.  It was the last beautiful day before the cold weather hit the Truckee Meadows and they decked The Grove out in fall colors, both outside and in.  I had received a call from Jenn's mom just two weeks prior telling me that the couple had just booked The Grove and was I available?  I met Jenn, Dennis and Jenn's Grandma Patricia between a dental appointment and tux fittings down in Carson City and knew immediately that I wanted to be a part of their day.  We hammered out the ceremony music, the order of events and the music for the reception in an hour or so and nine days later I was playing "Signed, Sealed, Delivered I'm Yours" by Stevie Wonder as their recessional.  Jenn looked ethereal in her beautiful dress and with make up by my favorite artist, Corey from The Decorated Bride.  The ceremony was beautiful- warm and only a bit breezy and with a heartfelt and loving ceremony officiated by "Pop", Jenn's grandfather.  As the guests filed into The Grove for cocktails, the bridal party posed for pictures as the wind steadily increased.  It was the edge of the cold front rushing in, and the timing for the ceremony was perfect, as was the rest of the evening.
Teresa and her whole crew at The Grove are absolute professionals.  They give impeccable service and make everyone feel special.  Teresa is always in the background, helping guests, lining up the bridal party, and just making sure everything runs perfectly. The bartenders Jay & Amanda are fun and always have a smile on their faces.  Waiters Roberto and Marco are efficient, happy, and by far my favorite waitstaff in the area.  And Shaka's food is always outstanding- a real treat compared to the cookie-cutter food that some places offer.  I had to complement him on his shallot mashed potatoes- absolutely sublime!  Even the presentation is outstanding.  I normally don't take pictures of food, but the chicken was so delicious, and when I went back for seconds I realized that it isn't just thrown in a pan for the guests to fish out.  It was arranged artfully.  It just illustrates the time and quality they put in to everything they do there.
Jenn & Dennis finished their pictures and I announced them for their Grand Entrance to the chords of "Home" by E. Sharp and then faded into their first dance surrounded by bubbles the guests were blowing.  Jenn is a huge Van Morrison fan, so I played several songs by him throughout the reception.  After the delicious dinner, their Best Man and Maid of Honor toasted them and then the newlyweds toasted all their guests.  Both the BM and MoH are in the Navy serving our country, and both took leave and flew thousands of miles to be there, despite the short notice- one from New York and one from Japan.  Very cool.  Dancing started up again, with a great Father/Daughter & Mother/Son dance in which the B&G invited all the moms and dads and their kids up.  That is always a classy gesture.  The Anniversary Dance was fun as well, with Patricia and Pop (the grandparents) being the last couple on the floor, having celebrated 50 years of marriage!  What outstanding role models for the B&G!  Indeed, I was amazed they'd been married so long as when I met Patricia at the consultation I thought she was Jenn's mom, not her grandma. 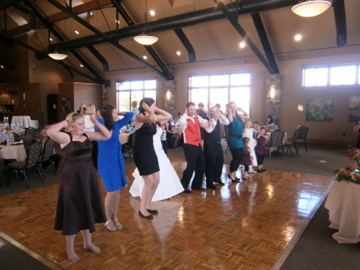 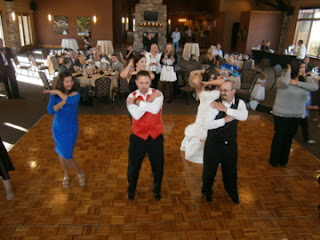 They had cupcakes instead of a traditional cake, and while that isn't all that unusual, the number of flavors was.  They had eight or nine flavors- each looking absolutely mouth-watering.  Normally I see 2-4 flavors... Just another example of the thought and planning they achieved in two short weeks.  They cut their cupcake to "Better Together" and then tossed the bouquet & garter to "Girls Just Wanna Have Fun" and "Legs" respectively.  After that it was solid dancing for the rest of the night.  For a smaller crowd, they were fun on the dancefloor, especially during the group dances.  I even snuck a Metallica song in for Dennis, as they are one of his favorite bands.  All in all, I was sorry to see the night end, but again they did it up.  Teresa had sparklers ready for the guests and Jenn & Dennis left through a sparkling archway.  What a special evening!  Thanks for letting me be a part of it Dennis & Jenn!  Your family & friends were amazing and of course The Grove crew was outstanding, as usual.