Being a wedding DJ means that I get to be a part of a something that is bigger than myself- the love, commitment, laughter, tears and fun of a special couple's most important day.  To be able to share and contribute to that couple's achieving their perfect wedding and reception is an honor and I take it very seriously, and to be able to work with other wedding professionals who feel the exact same way as I do is both refreshing and inspiring.  Such was the case at the wedding and reception of Christine & Jason.

I met Jason at an Open House at the Victorian House early in 2012.  Open Houses at the VH are fun, casual affairs where prospective brides and grooms can speak to various event professionals in the house without feeling pressured and while learning all about venues, services and ways to make their events pop and stand out amongst other weddings.  I had the pleasure of talking with Jason for quite some time and learned that he and his fiance were studying at UNR and were on a definite budget.  He also told me all about his future as a United States Army Officer after school and impressed me not only as a bright young man but also as a deeply patriotic one as well.  After talking with him for a while I thought to myself that I'd really like to be a part of his & Christine's day, and I hoped that their budget would allow for a DJ, even with the military discount I'd extend to them.  Then fate, karma or a higher power intervened.  Jason, along with dozens of others, had signed up for our Grand Prize Drawing where all of the VH vendors gave free or deeply discounted services for a couple's wedding day and literally seconds after we finished our conversation, his name was drawn, winning the Grand Prize!  Not only would I be deejaying their wedding, I'd also get to work with a lot of great people in doing so!
Months later, everything came together on a snowy late-December evening at Arrowcreek Country Club.  An outside wedding was ruled out but Blake and his crew at Arrowcreek put together a beautiful space inside next to the fireplace for the ceremony, and Pastor Kris Dahir presided over an eloquent and personal ceremony.  The wedding party was composed completely of guys except for the flower girl and Christine- there were groomsmen on Jason's side and Bridesmen on Christines. Very cool! The tuxes were provided by Tesla at Reno Tux Shop and all the guys looked very sharp. The flower girl had some adorable, last-minute jitters, walked partway down the aisle, panicked, and then sought the refuge of Pattye from Take the Cake Events.  People chuckled and went "awww" and then Christine walked down the aisle to a baroque version of "Canon in D" in one of my favorite dresses of 2012, an off-white gown that really set her hair and eyes off (I don't usually comment on dresses, as I don't have any fashion sense and all my brides are gorgeous, but this dress really hit a nerve with me...).
Christine's bouquet was from Allie's Flowers in Carson City and it and the other flowers were beautiful.
After the heartfelt ceremony by Pastor Kris, the newly-married couple left to Iz's "Over the Rainbow" and we all moved to the dining room.

Pattye and Cassie from Take the Cake Events are fantastic.  They provided day-of coordination and were involved continually behind the scenes making sure everything went more than smoothly.  To have the peace of mind that they provide is priceless on your big day.  They were there before I arrived and still there after I left, and I arrive early!  As guests moved to the dining area, Trevor from Zinser Photobooth went into action, welcoming them and making their evening even more fun and special.  In the dining room, each place setting included a special program/menu provided by the amazing Jessica at Stylish Scribe and I heard many compliments about them.  I had the pleasure of working with Steve Dutcher of Steve Dutcher Photography for the first time and he and his second shooter were very professional, pleasant and extremely innovative in the shots they took.  Blake from Arrowcreek was there all day as well, very accommodating and helpful, and his staff was very friendly and efficient.

Dinner was served to strains of "Be Our Guest" and afterwards champagne and cider was poured for some very personal and heartfelt toasts.  An amazing toast was given by Jason's brother and Best Man Scott who had everyone rolling with laughter with his witty observations.  One of the top two toasts of 2012, in my opinion, and there were dozens of extraordinary ones this past year.  Then the newlyweds moved over to the gorgeous and delicious Tiers of Joy Cake and proceeded to smash a some of it into each others' faces to "Can't Help Falling in Love"...
The action then moved to the adjoining room with the dance floor.  The dancing began with the B&G's first dance, Jason Mraz's "Lucky' and then into an Anniversary Dance where the married couples kicked it up to Sinatra's "The Way You Look Tonight". Lots of great songs and dancing followed, with the nearby Zinser Photobooth in constant use.  I was happy to play Billy Joel's "Just the Way You Are"  for Jason's folks and to see them transformed back to newlyweds and taken back to their wedding day, if only for a few minutes.  Again, what a great job I have!  To work with other amazing vendors, to help people relive magical moments, and most importantly to help make the bride & groom's day exceed their expectations.  Who knows?  Maybe 30 years from now I'll be playing "Lucky" for Christine and Jason at their son or daughter's wedding.  You never know... 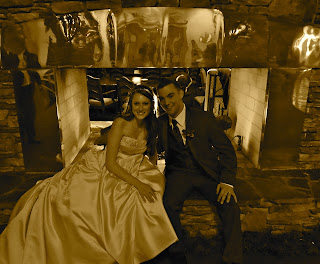