I had a great time a few weeks ago being the DJ for Brad & Shannon's wedding reception up in Squaw Valley at the Olympic Valley Lodge. It was my first time at this venue, it was a beautiful Sunday evening, and the newlyweds and their family and guests were ready to celebrate!

Shannon and Brad are just an awesome couple. I had a lot of fun when we were planning their music and events. They had definite ideas of music for dinner and for dancing, thinking about not only made them want to get up and dance but also what their friends and family would enjoy during dinner and for the events.  Making sure everything ran smoothly was Katie Ross, a wedding coordinator they hired for the day, and I was very appreciative of her hard work that evening. To tell you the truth, I am not impressed by that many coordinators. Many times brides and grooms would have been better off just leaving me in charge of the flow and events. There are a few, however, that really help take the event up to the next level through their dedication and hard work behind the scenes. Katie is one of these. She was constantly in communication with me, the photographer, the caterer and the bride and groom to make sure everything went as or better than planned. Made my job much easier, and the whole event benefited from her expertise.
Just outside the spacious ballroom is a garden where Shannon & Brad said their "I do's" and they had a strings group playing their ceremony and outdoor cocktail music. I set up inside and awaited their arrival. When the guests filed in they received a champagne-filled flute and settled in to their seats. I then started up "The Final Countdown" by Europe and began to introduce the bridal party accompanied by huge applause ending in a crescendo when the new Mr & Mrs made their official entrance. Toasts then ensued with MoH Claire, BM Paul and finally Shannon's dad Staff getting everyone to both laugh and shed a tear or two. Brad's father Jim then gave a blessing for the meal, and a delicious dinner was served and enjoyed.
After dinner I started up the Irish classic "Tura Lura Lura" and Shannon danced with her father Staff. Staff then handed his daughter off to Brad, and they started a wonderfully choreographed dance to John Legend's "All of Me". At about 90 seconds into their song, I scratched the record a bit, they looked up pretending to be surprised (the guests had very puzzled looks), and we transitioned into "Build You Up" by 50 Cent. The crowd went wild and I invited them to join the newlyweds up on the dance floor. The dancing never stopped from that point onward other than for a brief moment when the cake was cut. I played almost everything- from Stevie Wonder to Dean Martin to Jay-Z to the Spice Girls ("Wannabe"- super fun!). Anytime I can mix Frankie Beverley & Maze, Earth Wind & Fire and Heavy D & the Boyz and the dance floor is jamming, I am one happy DJ! 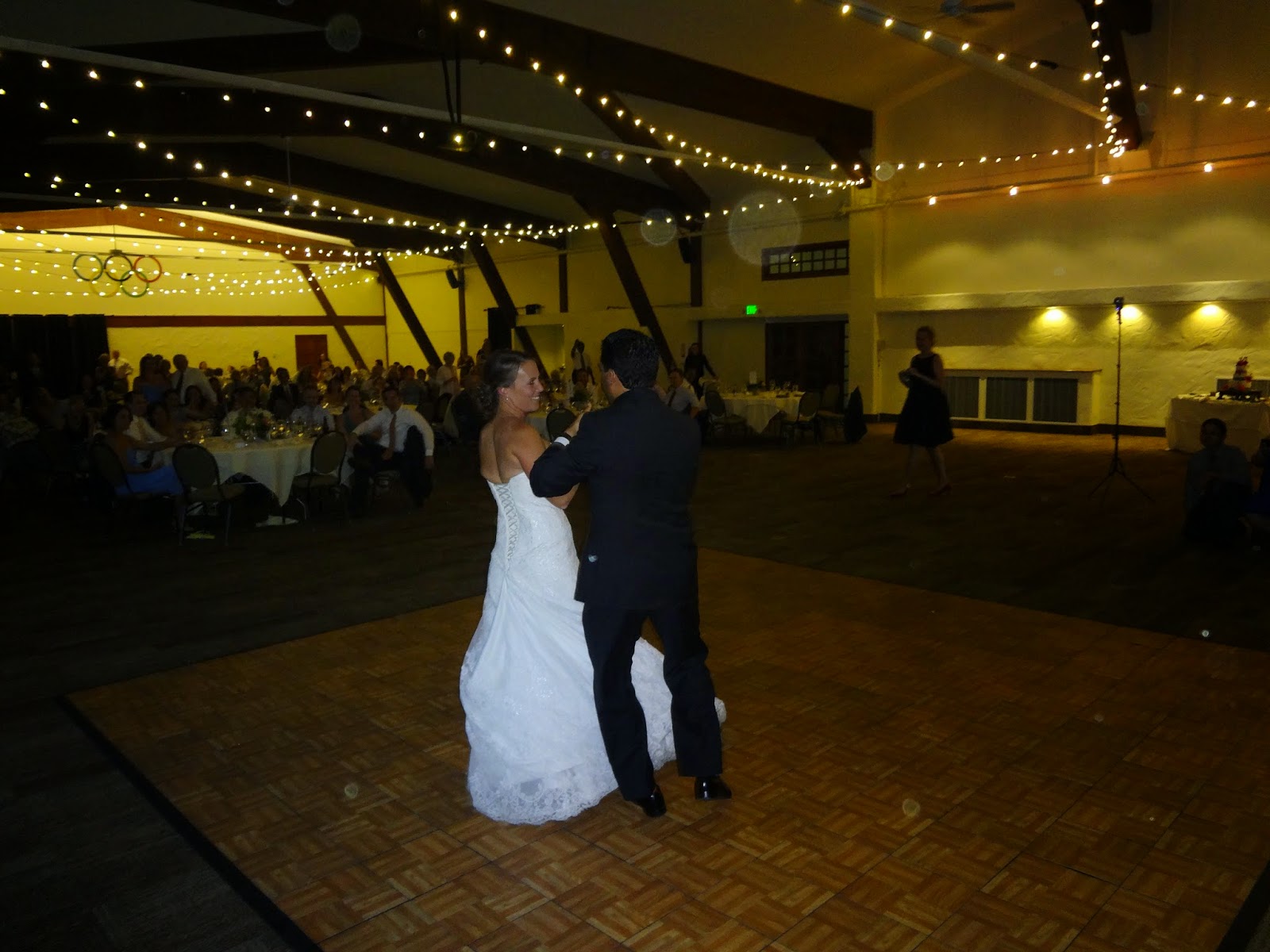 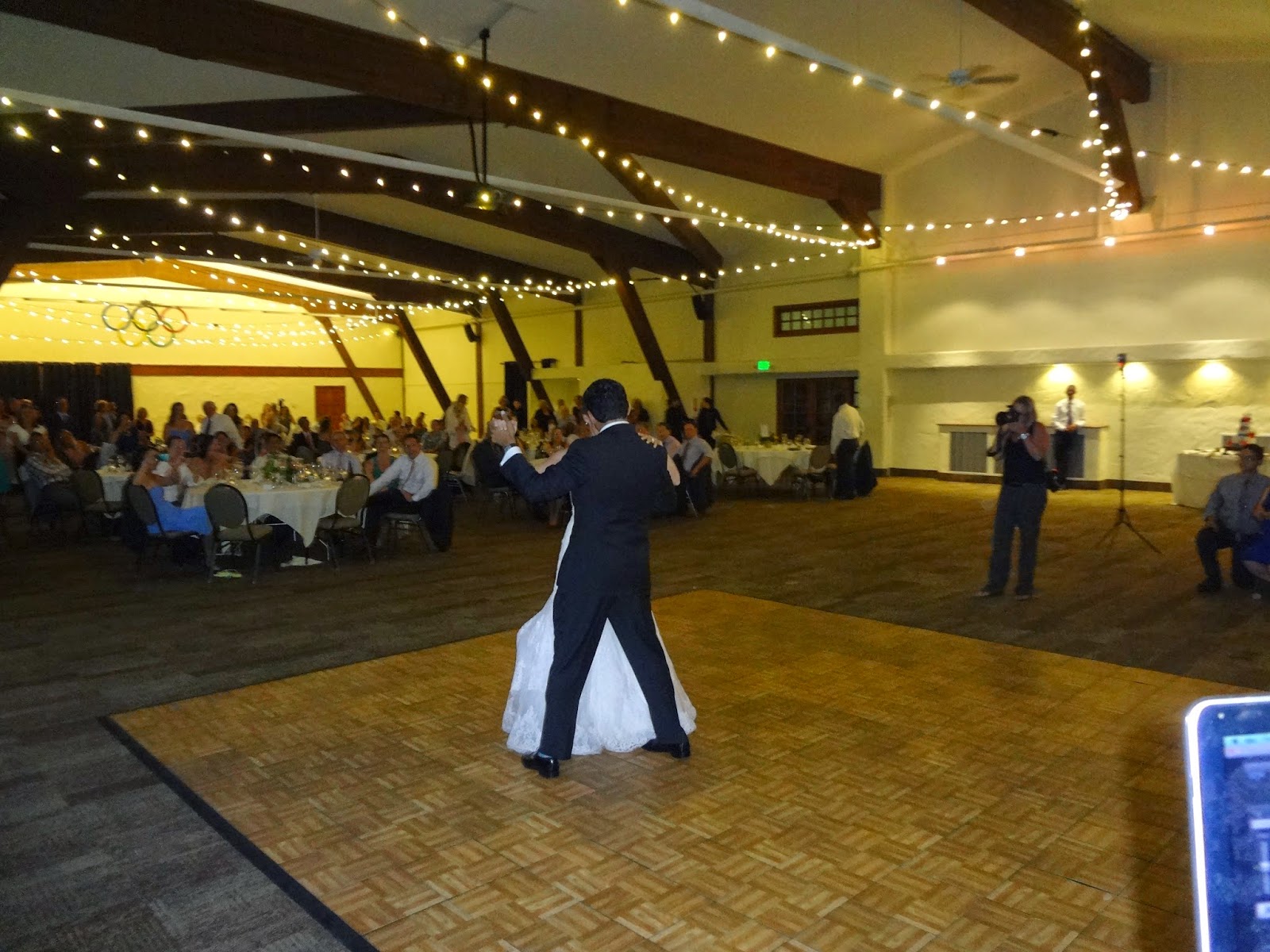 I loved the fact that Shannon & Brad really thought about their family and crowd. First they found out many of their close friend's and relatives' first dance songs and I played them interspersed throughout the evening. The coolest one was for Peg & Staff, Shannon's parents. Apparently almost 36 years ago, Staff's dad had the wrong song played for their first dance. They danced anyway, laughed about it later, and basically chalked it up as a funny anecdote. Shannon & Brad had heard this story, found out what song they had actually wanted ("Some Enchanted Evening") and I then played it for them and told the story. Better late then never! These were the kind of details that endeared them to their family and guests and made for a very personal and unforgettable night
They had friends and family from all over the country, especially from NYC and Boston. So they had me announce a round of Street Gangs (PBR and a shot) at the bar for the New Yorkers. As they gathered there, I played "New York Groove" by Kiss and then "Empire State of Mind" by Jay-Z. They had their shots and PBRs and then made their way back to the dance floor for the finale, "New York. New York" by Frank.  Not to be outdone, I then played "Sweet Caroline" for all the Bostonians. Leave it to Brad and Shannon to get these two rival cities together for a couple of songs! I saw Bostonians kicking like Rockettes and then New Yorkers singing along with Neil Diamond. So fun!
Thanks so much to everyone at the Olympic Valley Lodge- great staff! Thanks to Katie Ross for all your coordination and communication! Thanks to all of the guests and family that made me feel like more like one of them than a hired hand. And a big thanks and congrats to Brad & Shannon- it was a special evening that I'll remember for a long time to come. So honored to have been a part of your day!

This summer I have been blessed to be a part of so many super fun and memorable weddings. I get to meet some amazing couples and their friends and family and share in a day that they will remember for the rest of their lives. One of these exceptional couples are Brian & April and I was honored to have been a small part of their fabulous day this past July. 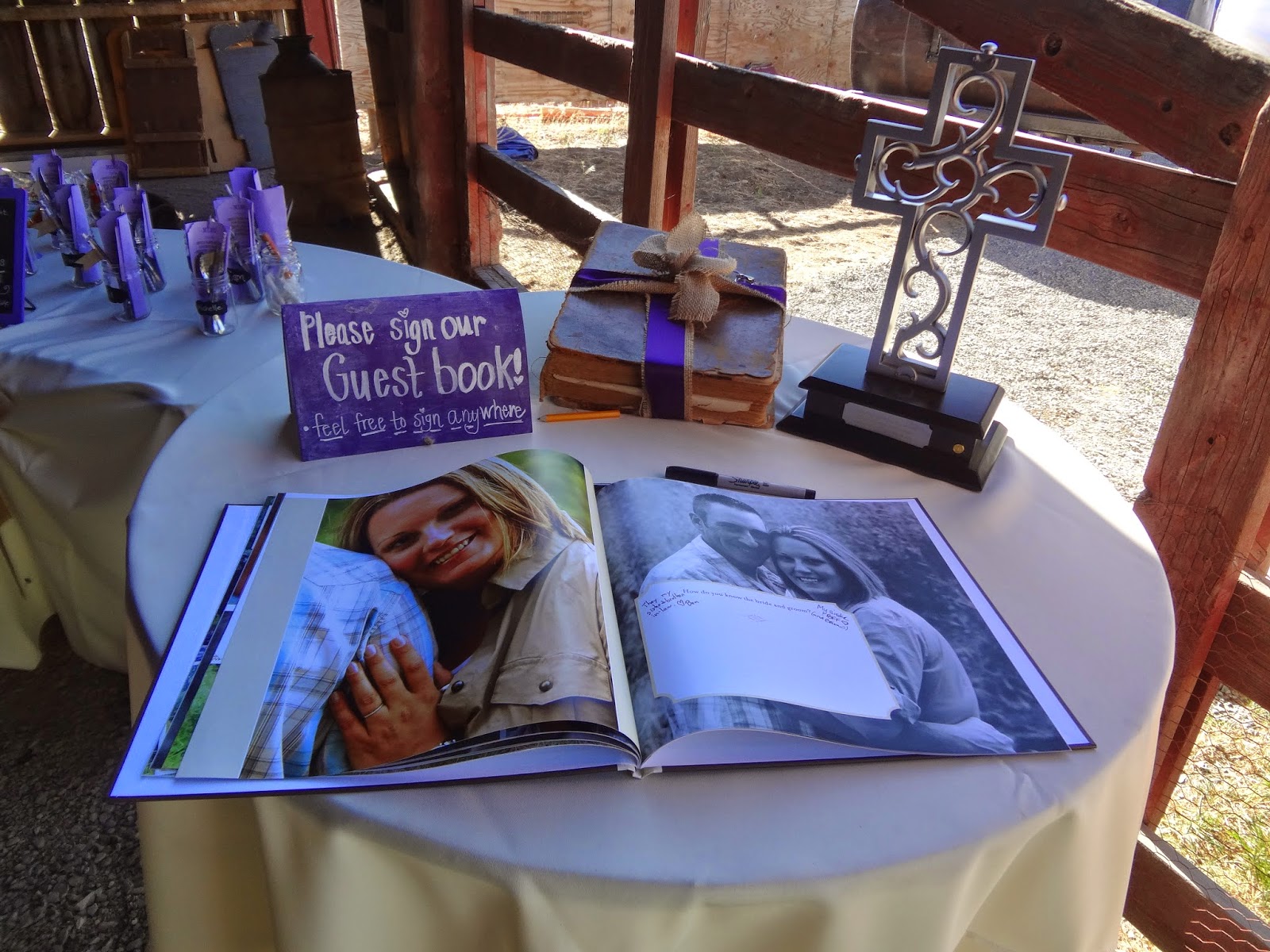 Everything about April & Brian is special. They are unique, down-to-earth, well-rounded and fun individuals that fell in love and now make that perfect couple. I felt so at ease meeting with them, discussing their day and what they envisioned and I loved all the unique and special touches they had planned for their day. 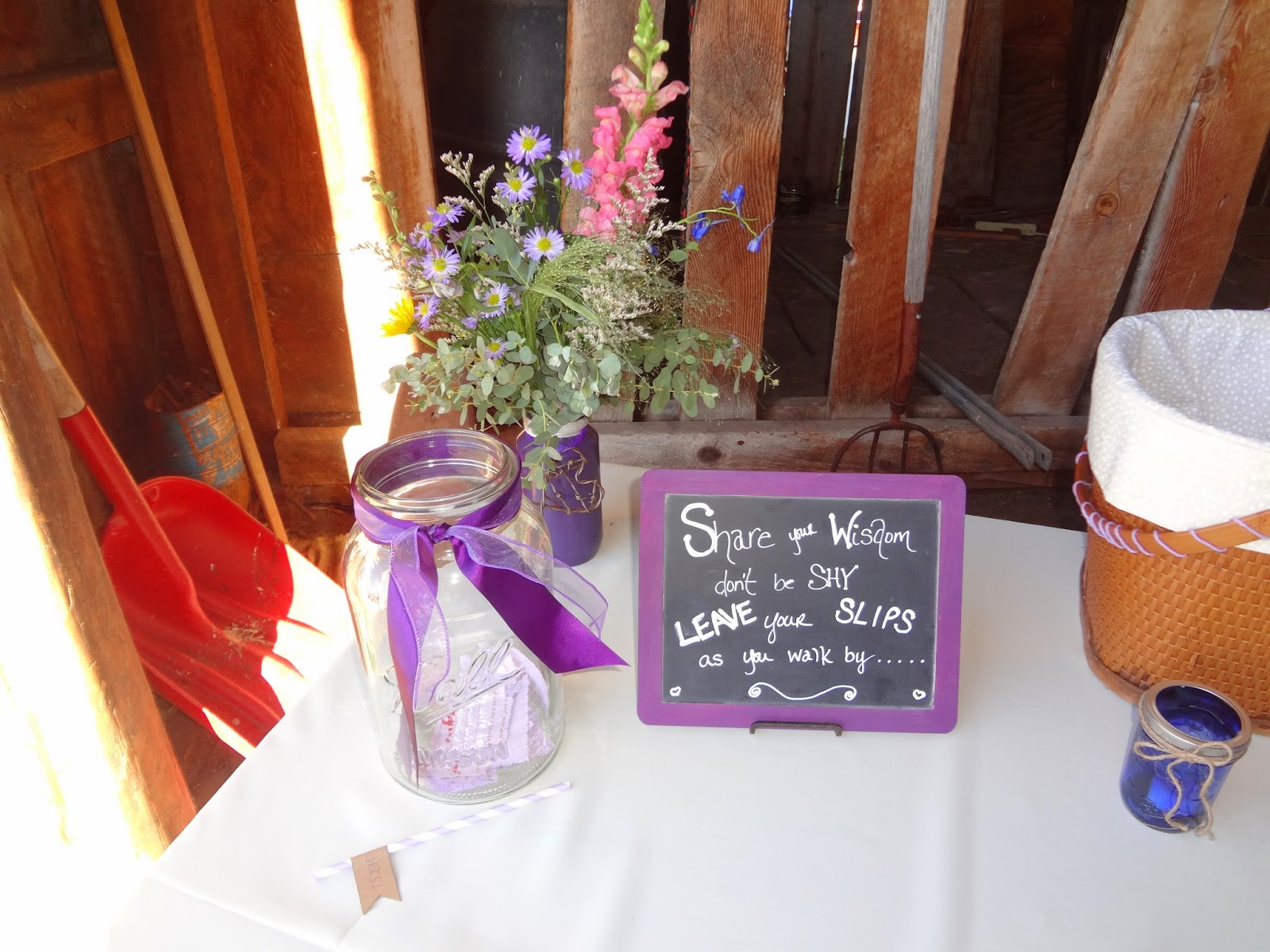 The venue was the first of these. It was my first time at the Lost Marbles Ranch, a working ranch in the valley between Loyalton and Portola which has started to allow events on their property. The day was gorgeous, and the country chic feel that April & Brian were shooting for was perfectly realized there. The ceremony was held in a garden near the pump house, with rows of hay bales covered in burlap as seating for their guests. The dining tables were set up outside the barn in a grassy spot, and the inside of the barn was decorated and became the dancehall and bar later that evening. The barn was built over 90 years ago and has a lot of character and a resident owl family. So unique! 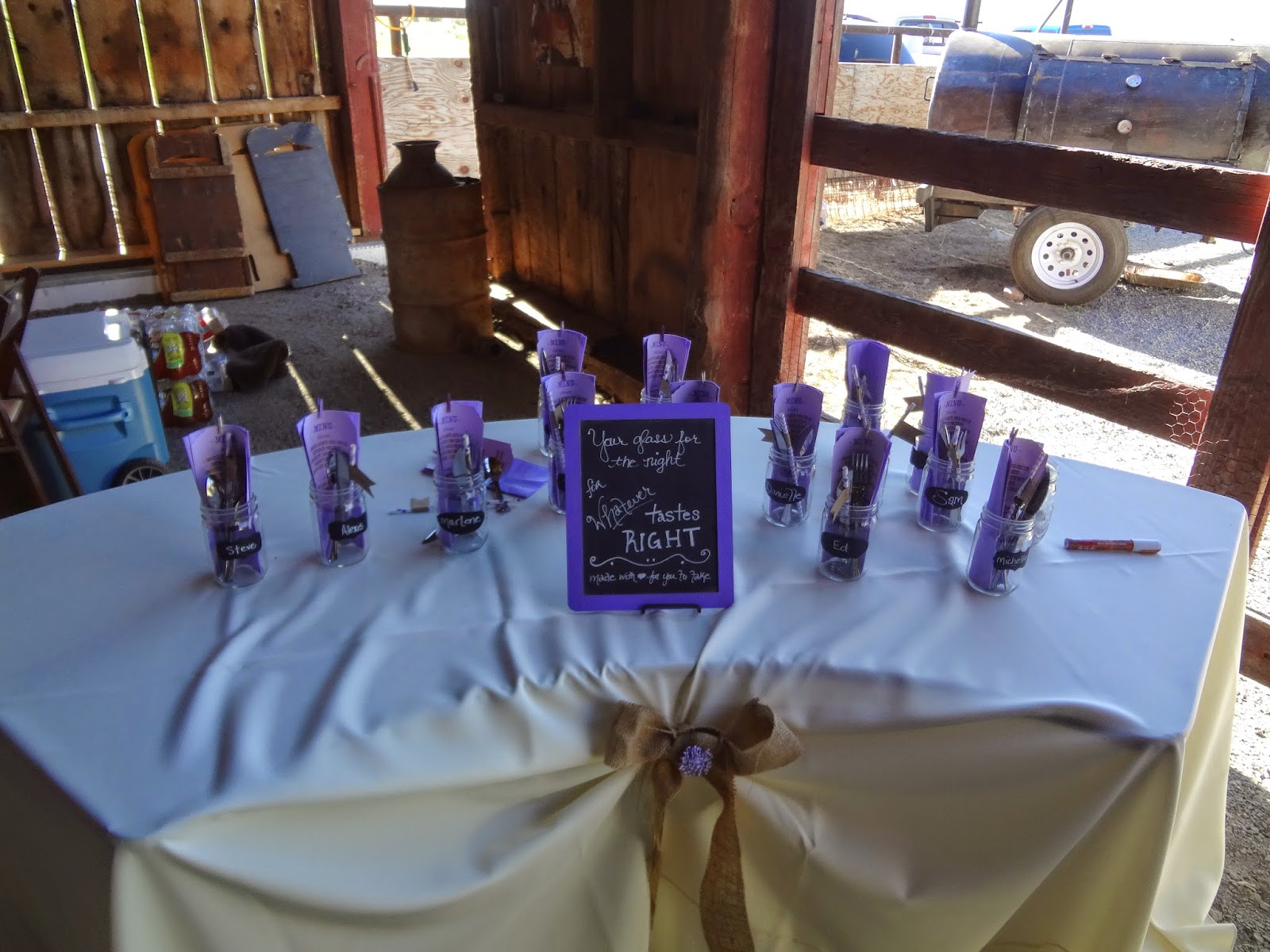 I don't usually pay a lot of attention to the decor, but April & Brian really went all out to make the venue pop and their guests feel at home. Wildflowers were placed everywhere and fun signage really brought the experience up a notch with their guests, giving them information as well as plenty of things to do and smile about. They had fun games like word searches and I Spy, a wedding app, and mason jars for everyone. It gave the event a flow that didn't interfere with the informal fun they wanted to encourage. 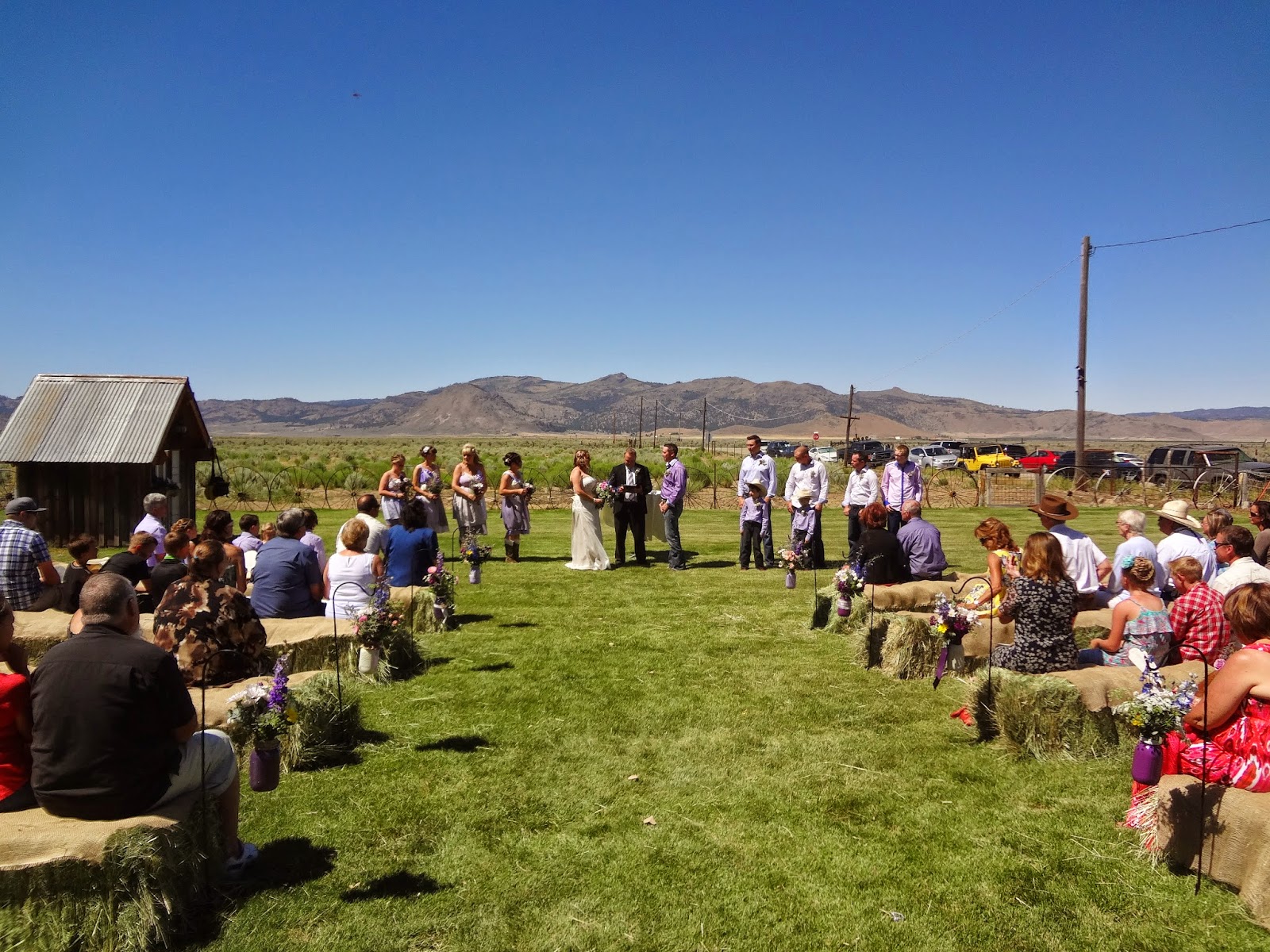 Music-wise, they put a lot of thought into the playlists for the ceremony, cocktails, dinner, and the dancing. They listed what they liked to dance to, but also what their guests liked as well, and really dug deep for their family & friends special songs. They had listed songs that they knew meant a lot to a friend or an aunt & uncle- maybe their wedding song, and that unselfishness really touched many of their guests. When guests come to a wedding, they expect it to be all about the bride & groom, and much of the day was, but for Brian & April to think about their guests and to make sure their special songs were played goes above and beyond and helps make a reception be that one that everyone compares all other receptions to.
The ceremony was officiated by Pastor Joel, and he knew Brian & April well and spoke of their relationship and commitment eloquently. I played "I Can't Wait" by Ben Rue when Joel and Brian entered, then a Baroque version of Canon in D for the rest of the bridal party, and when April and her dad appeared, Adele's "Make You Feel My Love" accompanied their walk down the aisle. They had this very neat cross (I should have taken a picture) which was assembled in a cross ceremony and was again, very unique and fit their aesthetic and personalities perfectly. The coolest thing about their ceremony though was a pair of songs specifically written and performed for them by a musician friend of theirs, Travis Atkinson. I played his "Grow Old With Me" during the cross ceremony and communion, while his amazing "Meant to Be" was their recessional. Fantastic, and the lyrics were written with Arpirl & Brian's story in mind. Very special! 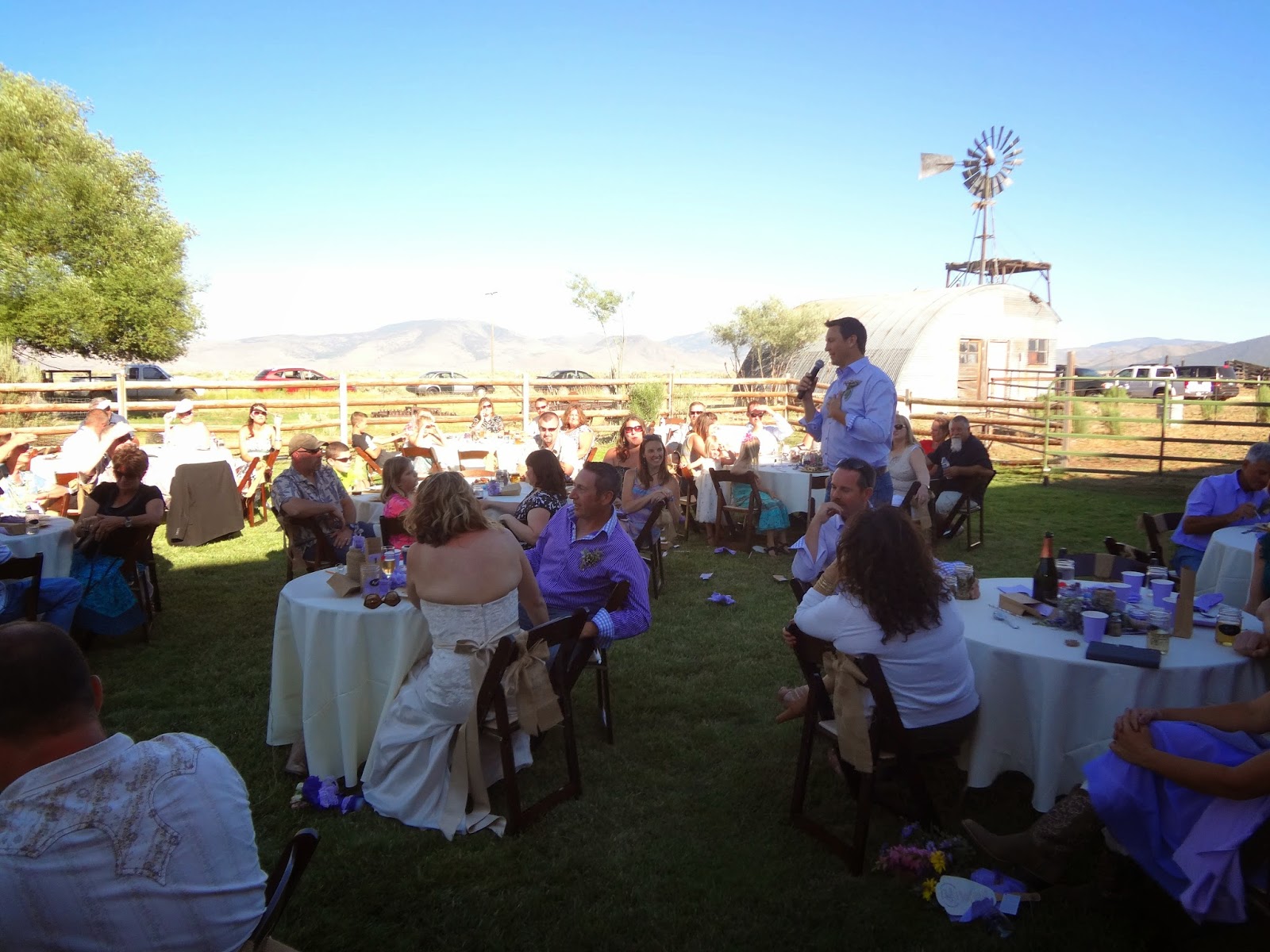 We all moved to the inside and outside of the barn while all the VIPs posed for pictures. The baby owl was in evidence all afternoon and evening (we probably kept him up past his bedtime) but the parents didn't appear until late that night. Very neat to have a working barn with built-in rodent control. Everyone explored the barn, had a drink, and had fun with the various activities on the tables.
When it was time for the Grand Entrance, the flower girls & ring bearers entered to "Kiss the Girl" from the Little Mermaid, while parents and the older bridal party members came in to "Fallin for You" by Colbie Caillet. As a crescendo of cheers peaked, the newlyweds entered to the classic "Ring of Fire" by Johnny Cash. What a way to start of the reception! A delicious BBQ (with an amazing sauce crafted by Brian) then followed, and as plates were slowly pushed away the toasting began. MoH KB and BM Justin gave very heartfelt toasts to lead off and soon everyone moved inside the barn and up to the bar for a special moonshine toast given by the bride & groom (accompanied by "Get Your Shine On" by FL-GA Line). Tiny mason jars, very ingeniously camouflaged were given out and some pretty raucous moonshine was imbibed and enjoyed by many. I judiciously just took a whiff from the bottle instead of a proffered shot, and it reminded me of very high octane stuff I tried in Georgia once- just a sniff probably raised up my blood alcohol level perceptively... lol!
Dancing started with Brian & April taking the floor to Blake Shelton's "God Gave Me You" and then Bob danced with April and Susan danced with Brian for the Father-Daughter/Mother-Son Dance, for which I played "Thanks Again" by Ricky Skaggs. Dancing then ensued in earnest, with a Money Dance and an Anniversary Dance mixed in. I loved the selections April & Brian chose- everything from Tanya Tucker to Jimmy Buffett to Sir Mix-a-Lot to OAR to Marty Robbins. So eclectic and fun! I had plenty of great requests from the guests as well- everything from disco to Bocephus to ACDC. The dance floor never emptied and only became more full as the night progressed.
I have to say that the atmosphere, the people, the music... everything just fit together perfectly. It will be, for me, the reception that all barn and country weddings are now measured by. So, so happy to have been a part of your day Brian & April. All the best you two! 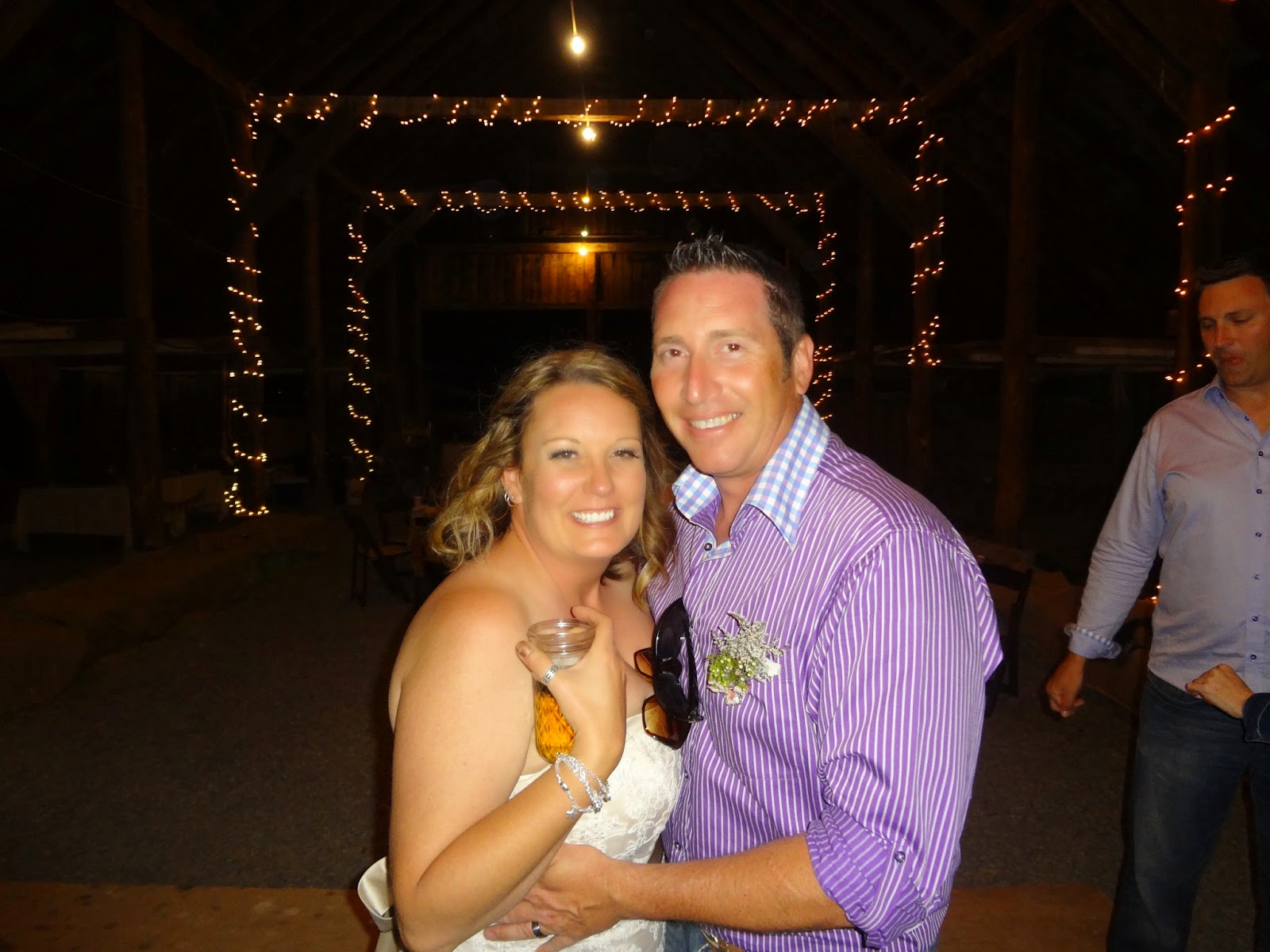