This past summer I was privileged to have been a part of Katie & Patrick's big day at the Chateau up in Incline Village. Katie & Patrick are a fantastic couple who had very definite ideas about how they wanted their wedding day to feel, sound and progress. They put a personal spin on so many things and made it a very unique and fun event.
First of all, they chose the Chateau. If you've never been, the Chateau is the clubhouse at the golf course in Incline Village. The course is immaculate- nestled in pine-covered hills and overlooked by the Sierras, and the Chateau is truly its namesake- a gorgeous mountain refuge with plenty of space, a huge deck, tremendous views, and a bunch of great people working there. 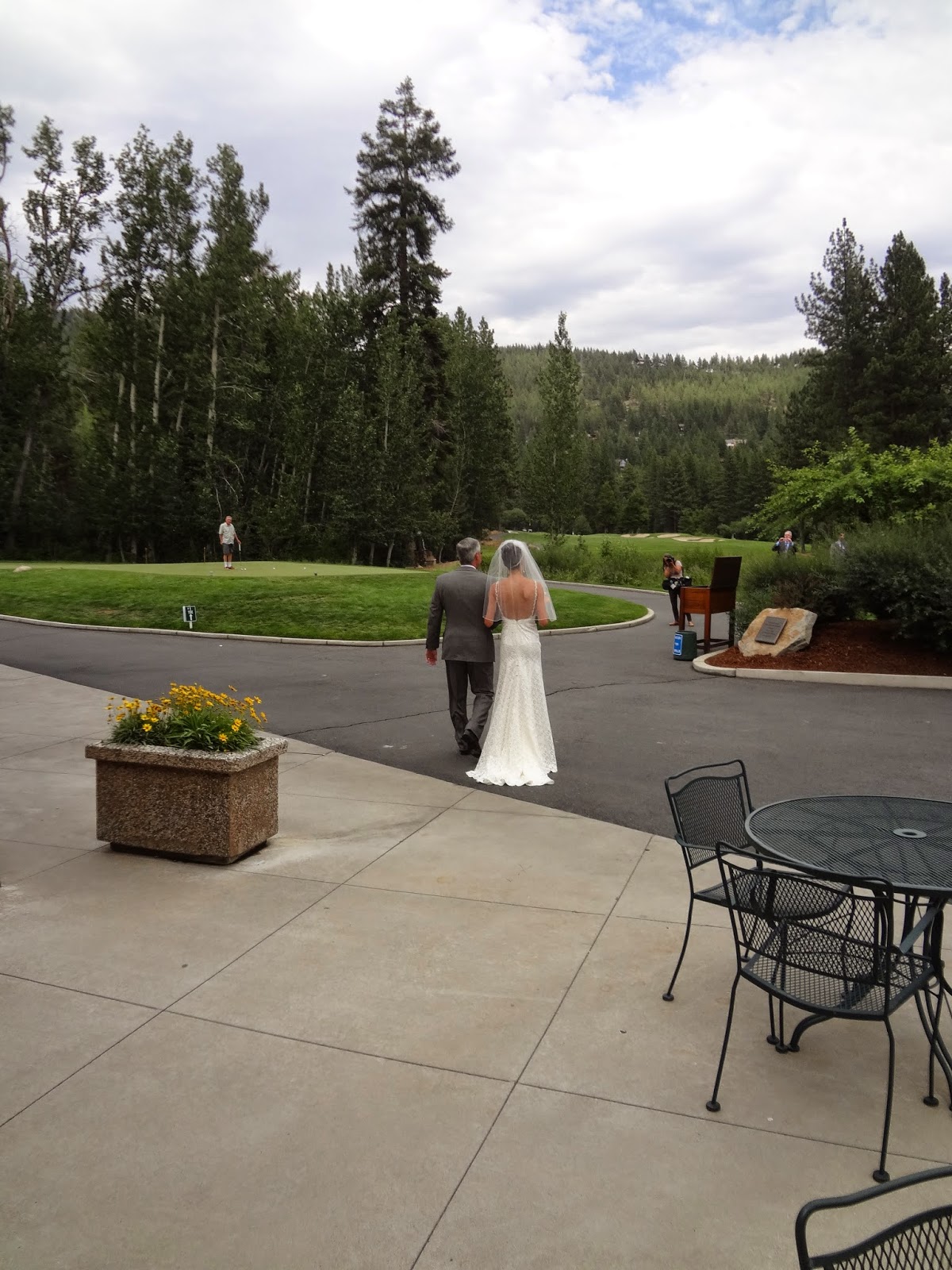 They were married right outside of the building, on a picturesque tee on a gorgeous afternoon. An absolute killer choice they made was to have Anne Roos from Celtic Harp Music do their seating and ceremony music. Anne is a harp virtuoso who challenges your preconceived notions of what a harpist should sound like. One of her songs has been nominated for a Grammy and we are lucky to have her here in our area. Her beautiful music punctuated the ceremony perfectly. Speaking of the ceremony, I provided microphones and amplification for their officiant Judy's use. She did a heartfelt job marrying the two, and when it was done everyone moved up to the deck for cocktails and more of Anne Roos' artistry. 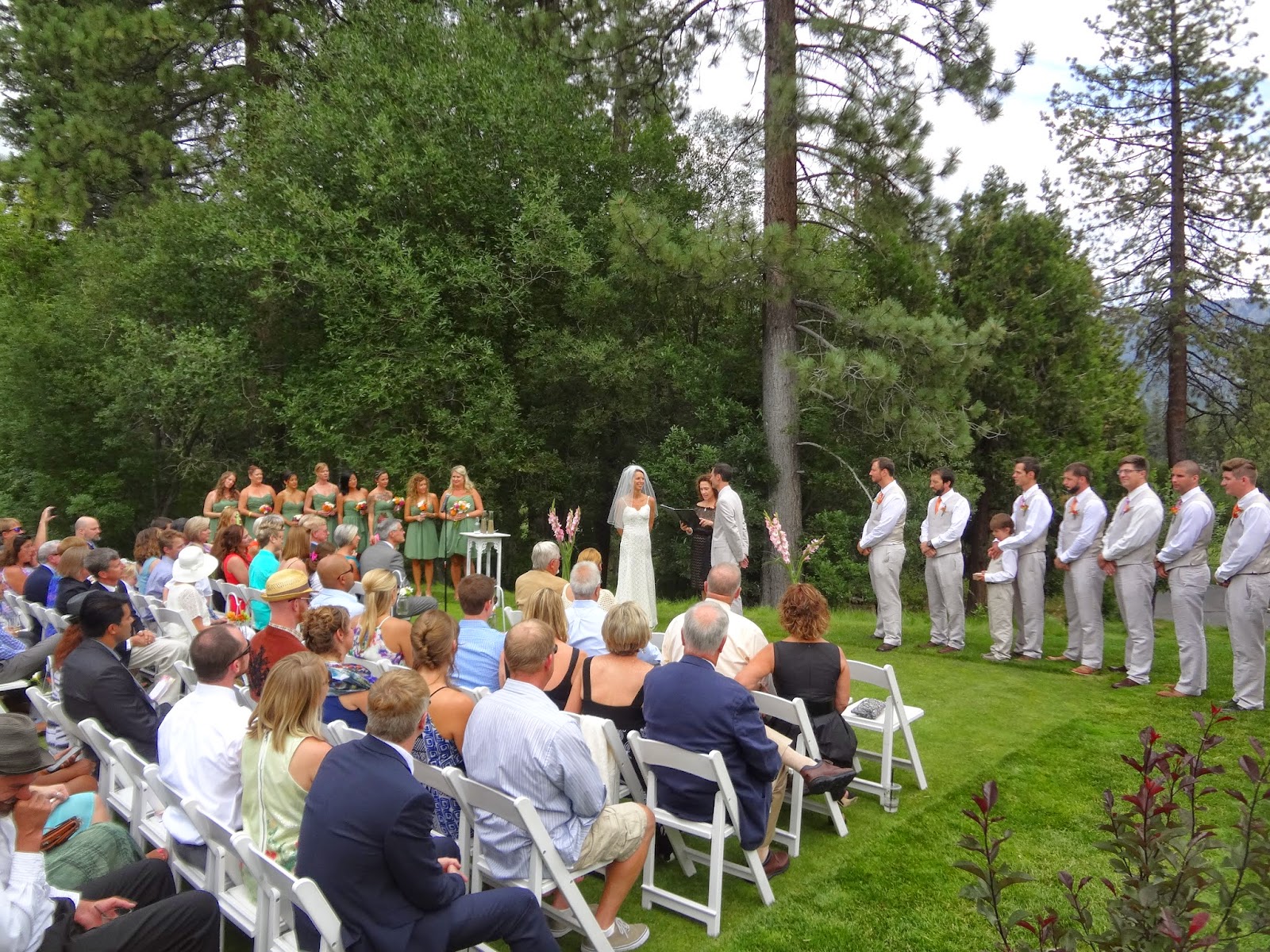 When pictures were through and the cocktail crowd had moved inside, we welcomed the bridal party accompanied by Imagine Dragons' "On Top of the World". Toasts then ensued, followed by a delicious buffet dinner by Alexander from Alexander's Catering. But wait! It wasn't that simple if you were a hungry guest. In order to get your table into the buffet line, Katie & Patrick had a surprise waiting...
First of all, the tables were named after 14 different languages- from Swahili to Swedish, from Hungarian to Hebrew and so forth (I think between the two of them they know all those languages!!!).  Then, James, a friend of theirs took one of my wireless mics and patrolled the dining room, looking for tables willing to sing for their supper. He got each table up, gave them a karaoke song (which I cued up and played), and they had to sing it to be released to the buffet line. Sweet! There was instant rivalry between tables and controversy ensued if a table thought another table's song wasn't loud or enthusiastic enough. It was a first for me- something I won't soon forget, and yet another cool way Katie & Patrick differentiated their wedding day from the ordinary.
There was a sense of fun throughout the evening. Again I loved how they tweaked things to make them special. After the dinner was done, they started the dancing with their first dance, Ray LaMontagne's "You Are the Best Thing". It was a great dance but that wasn't all. As Ray was fading out, Katie had a surprise in store. I announced that "No first dance is complete without a little Whitney" and mixed in "I Will Always Love You" which Katie sang at the top of her lungs to Patrick. The place went berserk! Super fun! Dancing then ensued and really only ever stopped once, when they cut their cake and then tossed the bouquet and garter. I played "Mr. Jones" by Counting Crows for the cake cutting, and then "Ladies Night" for the bouquet. To put an exclamation point on Katie's noble profession, I played Van Halen's "Hot For Teacher" when Patrick was busy removing that small piece of lingerie, and then when he tossed it, "Sure Shot" by the Beastie Boys got everyone back in the partying mood. Just a great crowd all night long! 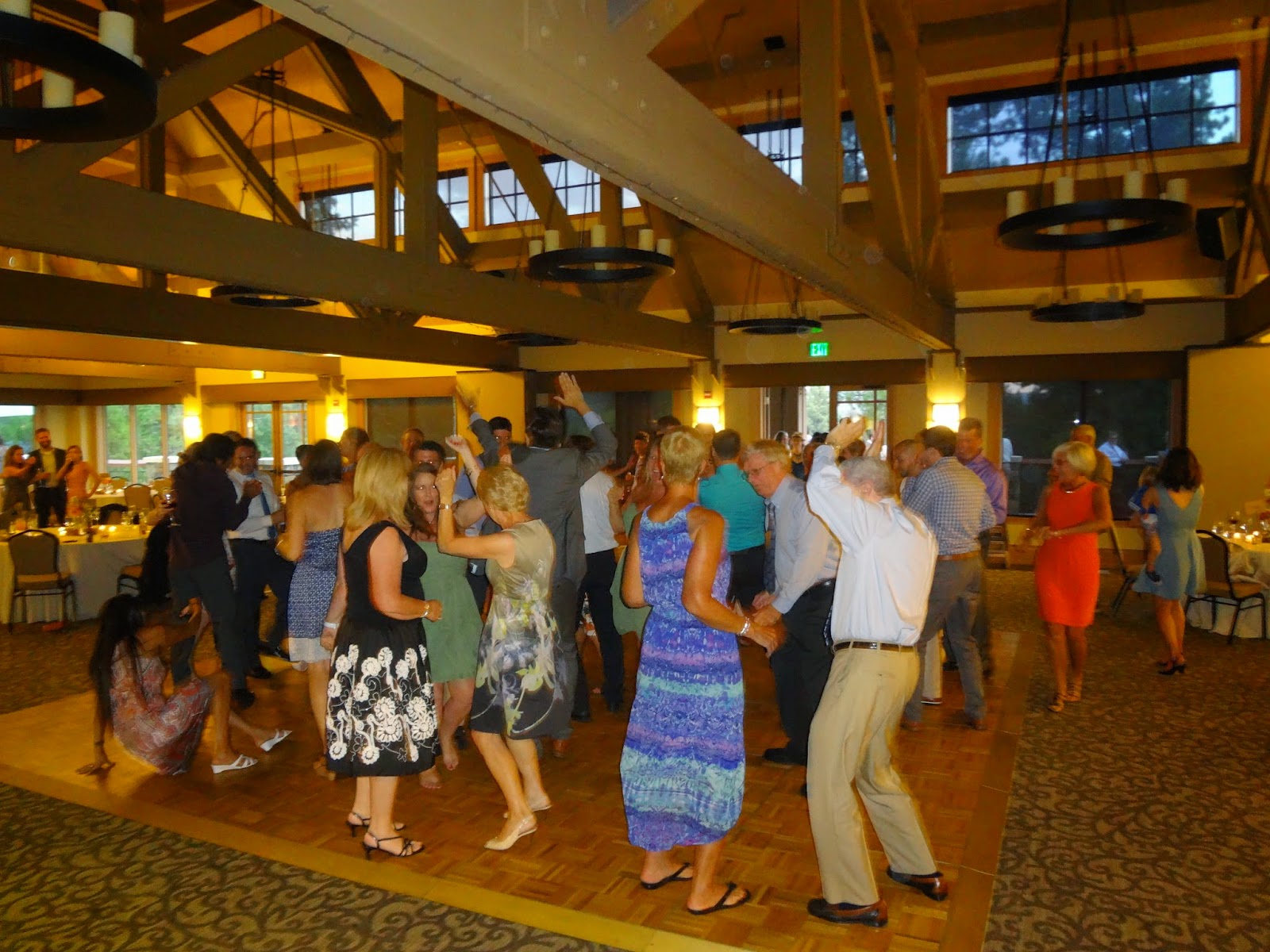 Patrick & Katie had spent some time compiling songs they wanted for specific times during the evening and also songs that they did not want played. They were very thoughtful as to what their guests would enjoy yet stayed true to their musical tastes- the best of both worlds. There were several birthdays and they made sure that I dedicated "In Da Club"to them. As you can see, it was a fun night! 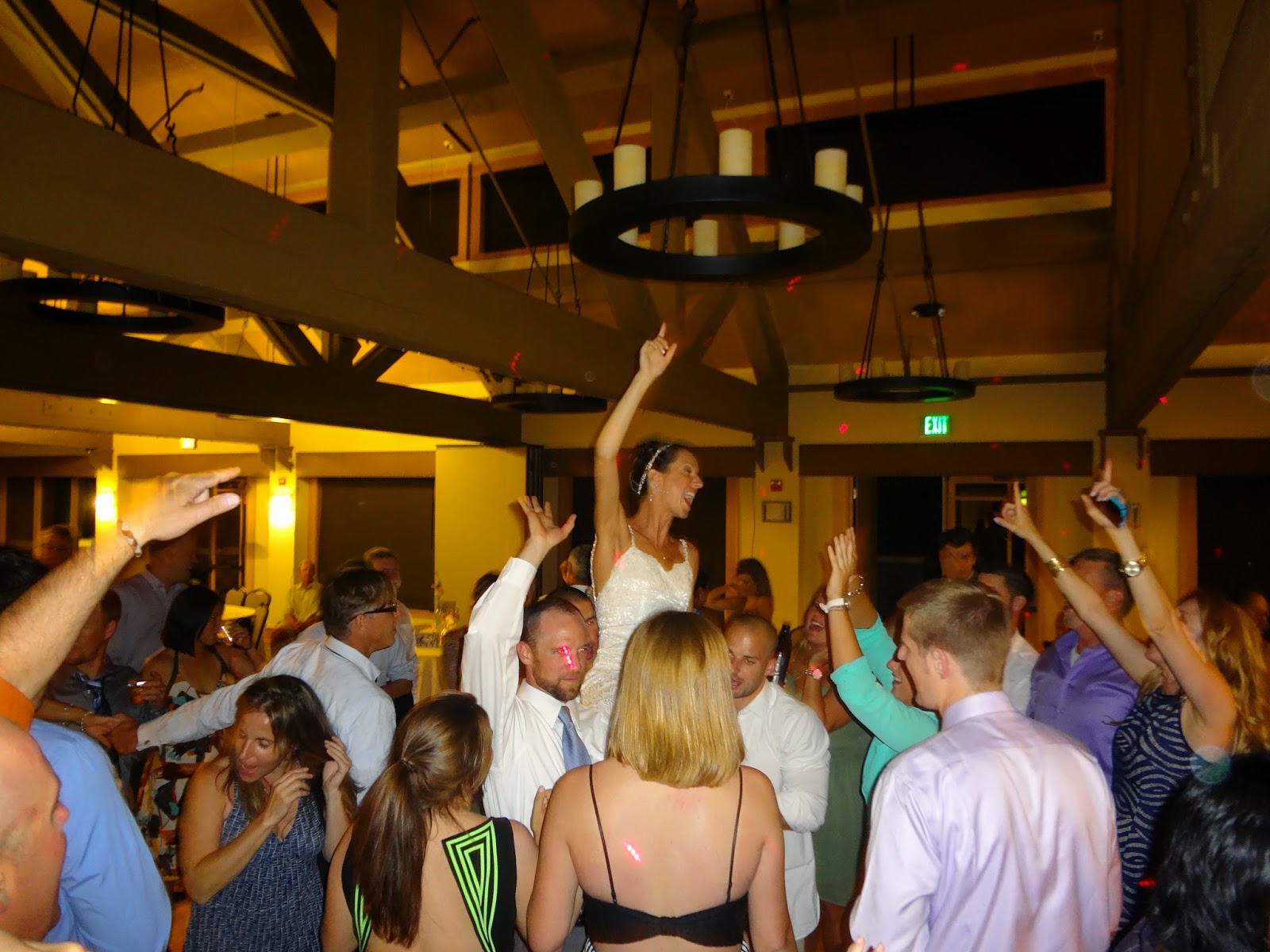 Thanks so much to everyone at the Chateau- it is always such a pleasure to work there. Thanks to the fabulous Anne Roos at Celtic Harp Music for her inspiring play. Thanks to Alex at Alexander's Catering who always does such a great job, even when waiting for tables to finish singing their song :) 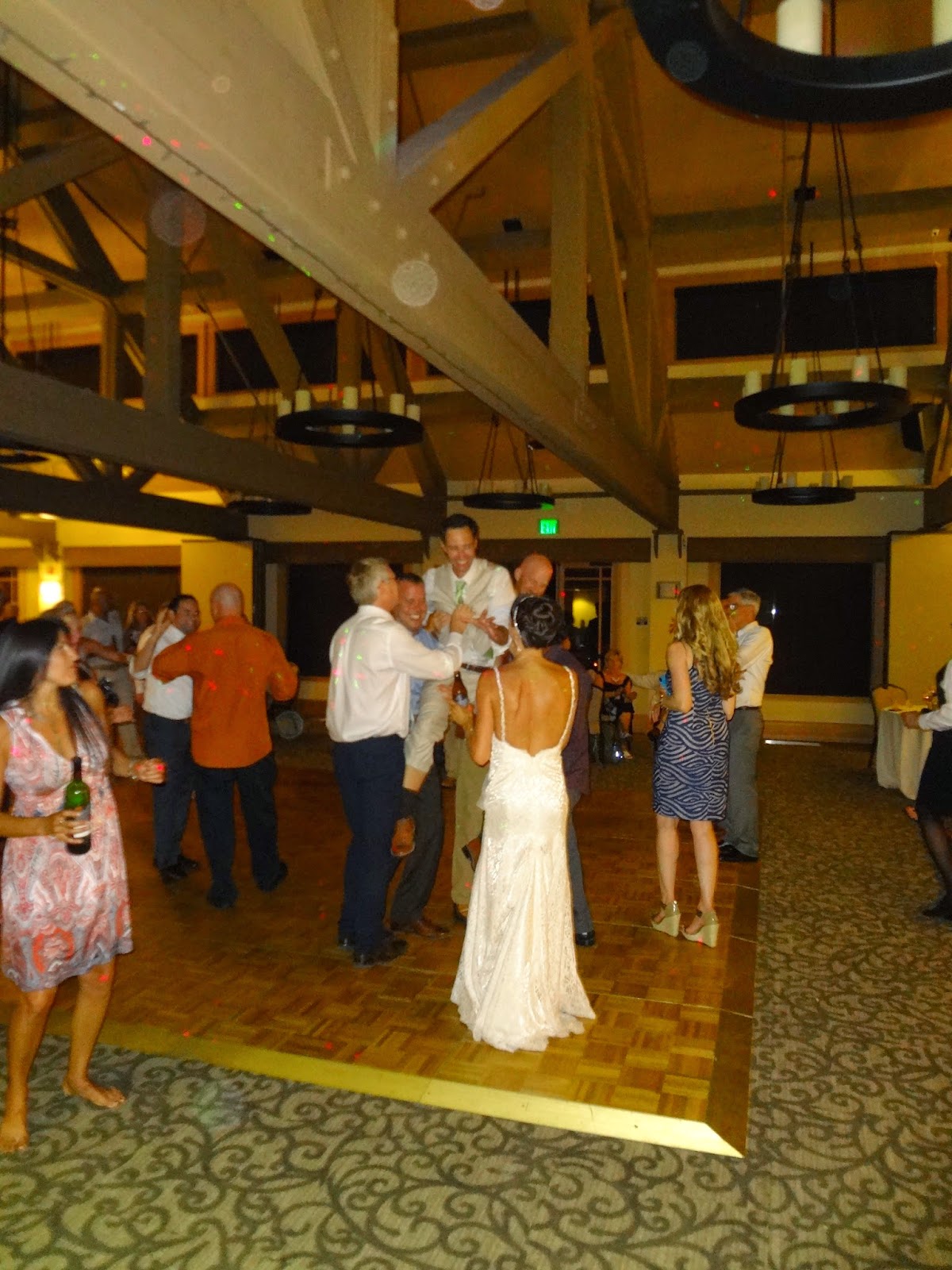 Finally, thanks to Katie & Patrick. You two really hit a home run with all that you planned that day and evening and it was so great to have been a part of your amazing wedding and reception! All the best and many, many happy years with one another!

I am always happy to lend my experience to clients but I also feel a responsibility to everyone trying to plan that perfect wedding or event. I can't be at every wedding or party, and I like to help people make educated decisions and hopefully have a fantastic event even if I am not available. If I can steer them to a great caterer, venue, or DJ, then I feel like I can repay that confidence in me that they showed in looking me up in the first place. But there are hundreds of other brides I never am able to help, and so when Georgia Fisher from the RNR called me to ask me if I'd like to be interviewed for their annual wedding issue, I jumped at the chance to perhaps make a few bride's lives a bit easier and their wedding days better. Thanks to Georgia for taking a rambling DJ's words and tangents and putting them down into something readable :)

BTW, here is a picture taken by my photographer friend Ken Lewis that was included in the print article but omitted from the online version: 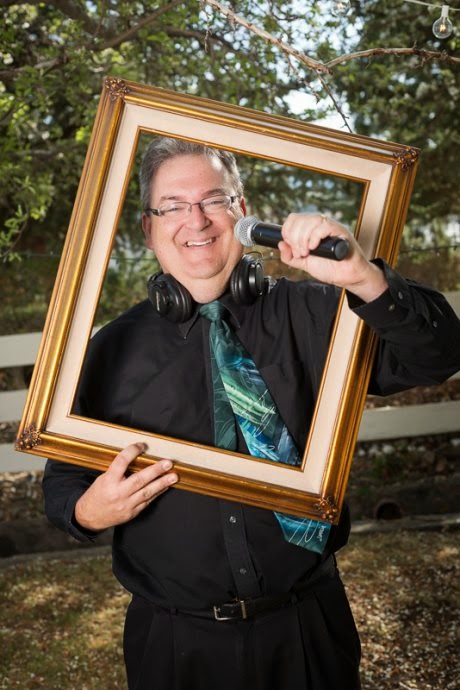 What the DJ is listening to: St. Paul & the Broken Bones

So, as a DJ I am exposed to a lot of music. Brides & grooms turn me on to new bands all the time. I watch every band on Fallon and Jools, listen to what my wife and kids are into, roam the dial and net for new vibes and just have a lot of tunes. The garage is full of vinyl & CDs while two macs and an iPad are filled to capacity with digitized songs. I love music and am always listening to new artists as well as discovering and rediscovering older stuff. It's an obsession with me that never subsides- looking for the next great band or finding that hidden gem of an album in a second-hand store.
This past November, late one Saturday night after a wedding, I was flipping around the tube, still wired from the evening's adrenaline and happened across one of my favorites, Flaco Jimenez, doing a song on a PBS Americana special. He was amazing, as always, and Jackson Browne followed him with a fine but unmemorable tune. Just as I was ready to flip to another channel, these guys came on and literally blew me away. They played one song, "Call Me" and then some other acts came on but that song was imprinted in my brain- I was humming it for days. Deep down, though I love lots of genres, I am an R&B guy at heart, and it was like Otis Redding and James Brown had come back to us in the form of some slightly nerdy white boys from Alabama.
I hunted down their album and it has been on very heavy rotation in my truck ever since. The local progressive station has been playing several songs off it the last month or so, and lo and behold they are on Letterman this Monday, at Coachella in April, but most importantly at Cargo in Reno next month.
I don't go to many concerts. Almost 30 years of deejaying has thrashed my hearing. I tend to watch my decibel intake and splurge only on what I consider hearing-loss worthy. Last concert I attended was the Texas Tornados a couple years back- previously it was the Fixx a year or so before that. There are a few bands that I'll break the rule and see whenever they come around- EW&F and the Stray Cats come to mind- otherwise I really am picky about who impacts my stereocilia.
Long story short- I have tickets to SP&tBB next month and can't wait to degrade my hearing just a bit to see these guys in person. Check them out below then come check them out with me in person Friday the 13th before they get uber famous and stop playing the intimate clubs. I'm a fan.