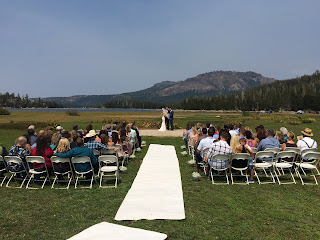 I really get to deejay for the the best brides and grooms at the best places. Take this past weekend's couple for example: Morgann & Danny.

Morgann is a first grade teacher and has a gift for organization that really shone all throughout the planning process. She had a very clear vision of what she wanted for their most special of days and it was spectacular. When certain venues didn't quite fit her dream, she continued to search and found a beautiful mountain retreat that she, Danny, and their guests could have all to themselves: Silver Lake Stockton Family Camp.

This camp was started in the twenties by civic leaders from Stockton California as a refuge from the hot Central Valley summers. It is a 10 minute walk from Silver Lake, sits behind another, more commercial camp, and has nothing beyond it but National Forest land. Some forty rustic cabins and a dining hall make up the bulk of the camp and when you are a guest there, the staff does all the cooking. The staff, headed by Ron and with Chuck as bartender, were super helpful and friendly. They had had only one other wedding there prior to Morgann & Danny, and they were happy to share their little corner of mountain paradise with Morgann & Danny and their guests. They had done a welcome BBQ the night before and had scheduled a farewell breakfast for the next morning, so it was a wedding weekend, not just a wedding day. It really is a great vibe when your guests don't have to depart after the reception or can come early and spend extra time with everyone else. Morgann's vision was coming into focus.

The wedding site was another outstanding choice. A meadow gradually merges with Silver Lake about a quarter mile from SLSFC leaving a breathtaking view of the water and the surrounding Sierras. Chairs and a white runner were set up but there was no need for an altar or arch- a large slab of granite rises up from the meadow making a perfect focal point and vow area.

I set up under a large pine and waited for the nuptials to commence. A generator was required as, in the middle of this natural splendor, there weren't any plugs within 500 yards or so ;)  My Honda 2000 again performed flawlessly and provided me with the ability to mic their officiant David and play music for the pre-ceremony and ceremony.

I loved their musical choices! They wanted reggae for the seating period before the ceremony, so I had a great time picking choices that just put an exclamation point on their fantastic setting. Many of the guests could be seen enjoying the music and a fun, yet unique tone was set. The wind then came up a bit, as it is apt to do in the mountains at times, and the white runner that Morgann was due to shortly walk down on became twisted up. Several guests jumped up and became an instant 'Honor Guard' of sorts, keeping the runner in place. It was a great example of everyone pitching in to make sure that everything goes smoothly. When Danny and David were situated on their granite dais, a decorated electric golf cart pulled up with Morgann inside. She had picked a perfect and unique song for her processional, "Impurity" by Kaizen which she had practiced walking down the aisle to a couple times previously. She got out of the cart, fixed her dress and timed her walk perfectly. The 'Honor Guard' faded back as she approached, having done their jobs with distinction, and the tempo of the song continued to grow as she came closer and closer to that slab of granite holding David and her husband-to-be. I was so happy that all of her effort and planning had blossomed into the perfect processional. 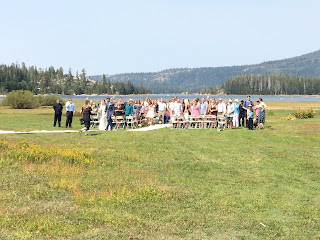 David then took over and performed a wonderful ceremony, highlighted by some very personal readings and vows that Danny & Morgann had chosen. When all was said and done, kisses were exchanged, and they recessed triumphantly to "Easy Love" by Sigala. They then turned and everyone got in a group drone shot, which framed by the lake and mountains must be a spectacular photo.

Photography (and drone shots) were aptly taken care of by Chloe of Chloe Ramirez Photography out of SAC. I'm sure they are 1000% better than these iPhone shots of mine ;)  She and her second shooter were very professional, fun, and easy to work with all throughout the day and evening. It is always a pleasure to work with professionals and she was top-notch. She tirelessly worked to document the entire event and I'm sure her photos will be amazing.

Ron, the head honcho at the Silver Lake Stockton Family Camp, was also fantastic to work with all day and evening. He and his crew worked tirelessly all evening and they do it for the benefit of their non-profit camp so that people can continue to enjoy the mountains and the traditions that have been kept up there for nearly one hundred years. Hopefully it will still be here in another hundred years, and will have been the scene of many happy wedding celebrations. It's a venue where you know that your dollars directly fund the camp so that families and children who might not ordinarily be able to enjoy the Sierras can do so. It's a win-win. 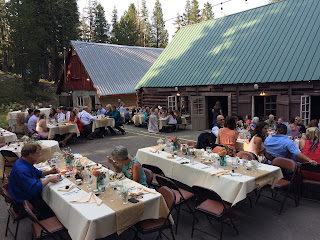 Morgann & Danny came back from photos and had a grand Grand Entrance. Chloe had everyone come out on the broad steps below the hall and, with the drone hovering above, the newlyweds entered to "With You" by Dirty South. After a little while longer, everyone moved to the opposite side of the hall and sat amongst the pines and enjoyed a dinner prepared by Ron & Co. 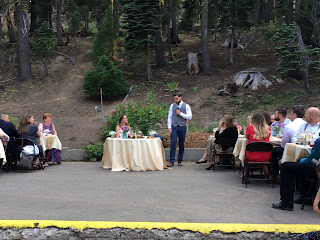 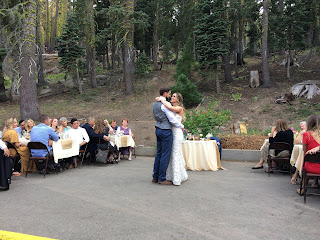 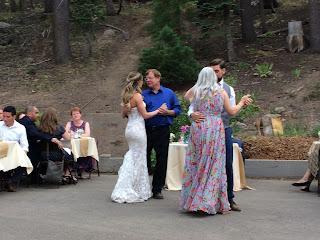 When dinner plates were pushed aside and champagne and cider glasses filled, Danny started the toasts, thanking all the many people who had helped to make this weekend come to pass, especially his new wife who had really knocked it out of the park. More toasts were then offered up and then, under the trees and surrounded by their friends and family, they danced to their first dance as husband & wife, "Danny's Song" by Loggins and Messina. I heard so many compliments about the appropriateness of the selection- I mean obviously the title and the groom's name match but even beyond that. The lyrics seemed to encapsulate them perfectly.  As the song ended and the cheering died down, I began "Just the Way You Are" by Billy Joel.  Morgann stepped out with her dad Gerhard and Danny with his mom Nikki, and again the musical selection seemed ideal- their moment transcendent. I am so unbelievably honored to witness moments like these. 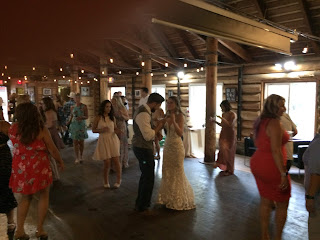 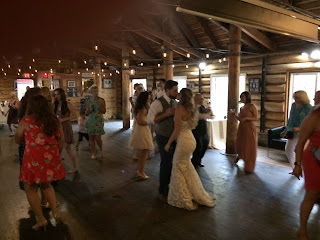 Dancing followed inside with more reggae, current hits and hip-hop as well as some electronica. It was a fun crowd and I had lots of requests. James Taylor did interrupt the dancing for a bit ("How Sweet It Is") while M&D cut their delicious cake. As the dancing continued, people would slip out, head to their cabin, and slip back in wearing more comfortable clothes and shoes. Indeed, a blazing fire-ring down below the steps complete with s'mores added to the rustic charm, and as the last dance was played people made plans to meet beside the fire and continue the evening. 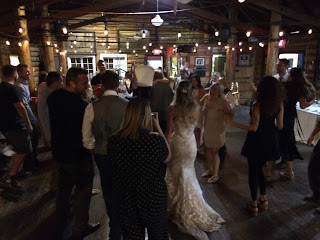 Such a fantastic afternoon and evening spent with a fun bride & groom and their crowd. Thanks to Chloe Ramirez for her stellar work and coordination. Thanks to Ron and Chuck and the SLSFC crew- so great to work with and talk to. And finally, thanks to Morgann & Danny and their friends and families for making it so memorable and fun for me. As I've said in the past: I love my job and whom I get to do it for :) 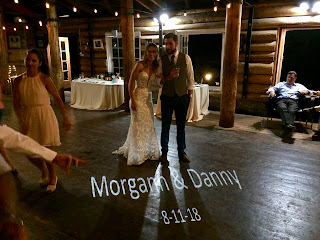