Lucy & Sid at The Grove at Southcreek 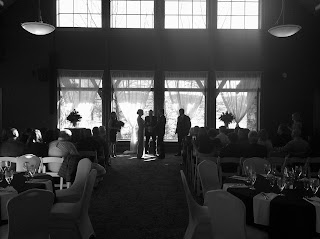 My first wedding of 2019 happened to be on the first day of the year, and it set the tone for what will surely be a phenomenal year of weddings!

Sid and Lucy have grown and almost-grown children. They have grandchildren. They both were doing well as successful single parents when they met and sparks flew. Sparks, heck! More like Fourth of July fireworks! I get to work with so many fantastic couples, many so very deeply in love with one another, but I think Sid and Lucy topped that parameter. When we met they were so aware of each other. It's like their consciousness exceeded themselves and included each other. There are constant touches, both conscious and unconscious. When one is across the room the other seems to know instinctively where the other is and how they are. It is so special to be a part of a celebration of two people, whom after spending perhaps half their lives apart, raising exceptional children and excelling at their professions, experience the love of their lives. They are living proof that true romance is alive and well and out there for those who seek it, no matter where you are in life.

They contacted me rather late last year. The whole thing was conceived and put together quickly- they were just going to elope, but thought better of that, and after meeting their families and friends I can see why. They wanted to share one of the happiest moments of their lives with the people they love. No better motivation than that.

They decided on The Grove at Southcreek. No better choice. Gigi and her staff are the best in Reno, maybe the best in NoNV/Tahoe, and speaking to Gigi and Ruthie prior to the event, I could tell that they looked forward to Lucy & Sid's day as much as I did. It was an intimate gathering, with the ceremony at the far side of the room, with me opposite near the roaring fireplace. The day was clear and sunny- if you didn't know the date you'd think it was 75 degrees outside instead of a crisp 30 degrees. Jen was the Grove's coordinator that day, and she and her crew did a wonderful job, as always. No finer group to work with.

Mark Frady was their officiant. Mark is an exceptional wedding professional. He loves what he does. He is devout but not zealous. He truly believes in the sacred nature of marriage and tries to imbue some of his copious wisdom to the couple standing before him, all with a friendliness and air of someone who tries not to take himself too seriously. Every time I witness a ceremony that he performs, I glean a little nugget or two that I can apply to my marriage. In other words he set a tone that was perfect for their moment. I am always happy to work with Mark. 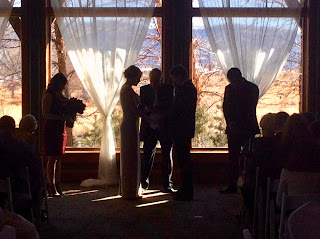 The guys came in with Mark as "Waitin' on a Woman" by Brad Paisley played in the background. Then Lucy appeared. She was resplendent (you don't hear that word often lol) in a sleek golden dress: absolutely beautiful on her wedding day. Sid looked like he had a tear or two in the corner of his eye as she walked down the aisle accompanied by her sons. In the midst of the ceremony they recited personal vows that got everyone a little teary. I, for one, felt enormously privileged to witness this public assertion of their love, so tangible and powerful. After their vows, Mark had all of their children and their two moms stand up with them, showing the two families uniting into one. Lucy had a bouquet that split into two parts, which she presented to her and Sid's moms. So special and unique!

Soon they were kissing, Mark was introducing, and I played them down the aisle to the Beatles' "All You Need Is Love"- especially fitting, I thought.

Immediately a Bloody Mary/Mimosa Bar opened up, with specially crafted cocktails for the thirsty guests and participants, and the efficient Grove staff removed the chairs and put a brunch buffet line in its place. Sid's brother Todd then gave an invocation and shortly after that people were enjoying a fabulous Grove brunch (did I mention that their food is extraordinary?) along with their mimosas and vodka-tomato concoctions.
The toasts were free-form and many in number. Heartfelt. Happy. Then I started up Rascal Flatt's "Bless the Broken Road" and introduced the newlyweds fr their first dance as husband and wife. Both of them had told me that the lyrics of the song really struck a chord with their lives and their romance and while they danced, oblivious to the gazes of all us onlookers, Sid softly sang the words to Lucy and Lucy to Sid. A love is so magnificent, so powerful, and so tangible. 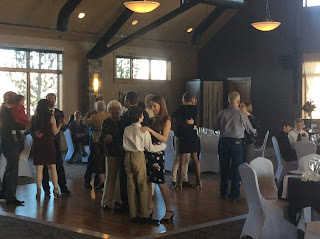 A family dance ("Unforgettable" by father and daughter Cole) ensued where Sid danced with his daughter and Lucy with her sons, and all the sons and daughters and mothers and fathers came out to share the song and the moment. True emotion witnessed yet again on this magical day.

Dancing ensued and it was great to see such enthusiasm in the early afternoon. I played lots of country and threw in some rock and pop here and there, everything from Cash to Strait, Lincoln Brewster to Alison Krauss, Van Morrison to Tim McGraw. An Anniversary Dance followed a fun group photo op and the celebration continued for several hours.

For their last dance I found another version of "Bless the Broken Road" on a Christian CD by Selah and Lucy and Sid had one last dance to sing to each other. Magical.

When all was said and done, hugs exchanged, personal items gathered up, I watched as Sid and Lucy approached every single person working their event- the photographer, the wait staff, bartender, kitchen staff and Jen and myself to personally thank them for helping them on their wedding day. Such a classy gesture from such a thoughtful and happy couple. What a way to kick off 2019!

Thanks to Mark Frady and Jen and all of the Grove staff for the excellent job you did! Thanks to the friends and family that made the day so special and fun. And thanks, of course, to Sid and Lucy for allowing me to be a part of their wedding and celebration. People like you make me a better DJ and reaffirm why I do what I do. All the best to you and yours and Happy New Year!